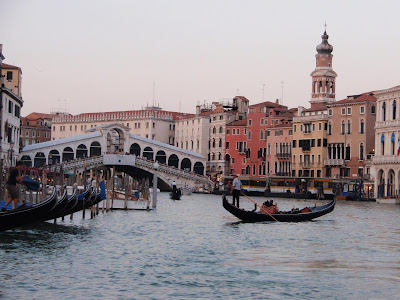 I've been keeping up with reports of the heavy rains in Italy, causing widespread devastation in many regions of the country. The hardest hit have been Liguria and Toscana, but Piemonte and Campania are also reporting widespread damage. In Liguria, Genova and le Cinque Terre have had heavy flooding, and the paesini (small villages) ofi Vernazza and Monterosso are digging out of the mud left over from landslides that coursed through the towns. In some towns, the mud covers the first level of homes and businesses. In Naples, flooding extends to Pompeii. As the storms move east, fears of the Po river flooding increase. Rain continues to fall throughout Italy, and other rivers are being watched as they rise closer and closer to the flood level stage.


In contrast, we still have sunny weather here in Kansas, with cold temperatures at night (0 C), but warming up into the 60's (17C) during the day. Last night, however, I was awakened by the sound of my house shaking, as doors and windows rattled for about a minute. Earthquake! Sure enough, there was a 5.6 magnitude earthquake in Oklahoma, which is 300 miles (483km) south of here. We don't often have noticeable earthquakes in this part of the U.S., but this is not the first one I've encountered. I awoke in a similar way some years ago when my bed started shaking, caused by an earthquake in Missouri. Fortunately, the Oklahoma tremors caused little damage, and no injuries.

Compared to the events in Italy, a few tremors is hardly worth mentioning. I feel fortunate to be safe, warm and dry while so many are dealing with widespread devastation due to heavy rains and flooding in Italy.

How can we help? One easy way to help is through la Croce Rossa Italiana (Italian Red Cross), which has created an English language website where anyone can send donations via credit card or PayPal. Here's a link:

These words arrived today in an email from my friend Luigi, as he recounted a recent trip to Val d'Aosta in northwest Italy. Luigi has been a steadfast companion since the early days of my journeys in Italy, nearly six years ago, and we often spark each other's creative spirit. Inspired by his words, I took a walk down a tree-lined street in my neighborhood this afternoon. The weather was balmy and windy, and I watched as leaves swirled along the streets or joined piles of other castoffs already accumulating in empty yards. Fallen leaves crunched noisily beneath my feet, dry and dusty, before scampering away in the wind.

Backlit by the sun, the trees that lined the street, one after another, created a vibrant luminosity. It was like gazing through a large kaleidoscope: brilliant hues and combinations of colors swirled together, creating a masterpiece of autumn beauty. I could see patterns of various colors mixing together in magnificent combinations. Hues of green, yellow, orange, red, and brown, often blended together in one leaf, created a wondrous feast for the eyes. Like snowflakes, no two leaves were alike, and the mixture of  colors seemed infinitesimal. I stood in awe under one particularly large and colorful oak tree, struck by the hues of green, yellow and red in each leaf. Even after one of the hottest summers on record, autumn is dressed in her finest and most colorful gowns this year. I'm happy to be a witness to this splendid beauty. 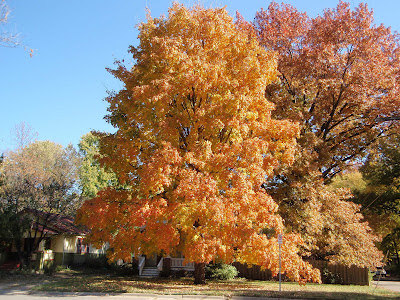 "Insomma il paesaggio era una festa per i miei occhi."
In short, the landscape was a feast for my eyes.

Posted by marybeth at 4:37 PM No comments: