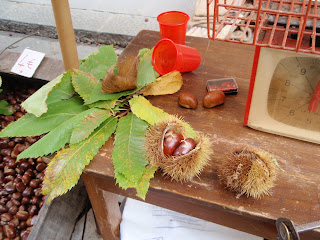 Chestnuts in their "skin"


On Sunday, I got up early, took a chance on the weather and rushed to catch an early train to Marradi, about an hour northeast of Florence, to attend the Sagra delle Castagne or the chestnut harvest festival. It had rained heavily during the night, and cloudy weather was predicted, but I was hoping to see some lovely fall colors in the countryside. I was not disappointed! 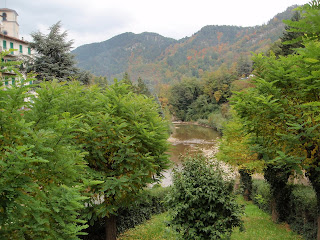 I took the 8:40 train, knowing it would be two hours before the next one came along, and it was crowded with people going to the festival. The landscape was a panorama of multi-colored trees filling the hills on both sides of the train. I've heard so many wonderful stories about the sagras during the fall harvest, celebrating everything from grapes to truffles, chestnuts to mushrooms, and I've been eager to attend one. Too often, they are in small hill towns that one can only reach by car, but I've discovered a few I can attend this fall by taking the train. For this festival, they even had a steam engine train you could ride from Firenze and a few other towns to Marradi last week, but I missed the chance to ride it because of the rainy weather. 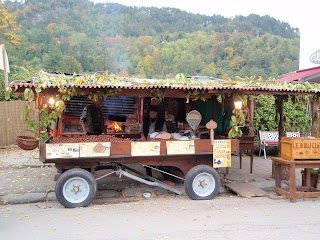 As soon as we arrived in Marradi, I could tell I had hit the jackpot: I'm pretty sure I was the only non-Italian in the trainload of people that spewed out of the train from Florence. This meant I was attending an event by Italians, for Italians, giving me an opportunity to experience a truly traditional festival, not something skewed to appeal to foreigners' tastes. 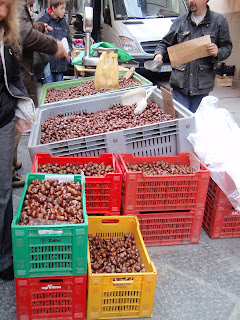 I tried several of the dolci, or sweets made from chestnuts: boiled chestnuts in pastry "boats," which I really liked, castagnoccia, a chestnut torte that I didn't much care for, chestnut brittle, which was odd because the nuts are so large, and caldarroste (roasted chestnuts), which I brought home with me and am still nibbling on. 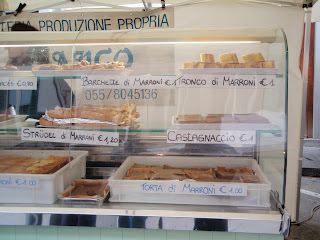 A selection of dolci


For lunch, I chose polenta al cinghiale (polenta with wild boar sauce), which was quite delicious, along with a glass of the local red wine. By noon, I was ready to head back to the station, knowing that if I missed the train scheduled for 1 pm that it would be a four-hour wait for the next one. Many other people had the same idea, and the train was packed with people when we left the station. I can imagine what the later train would be like, as more and more people were arriving in Marradi as we left. 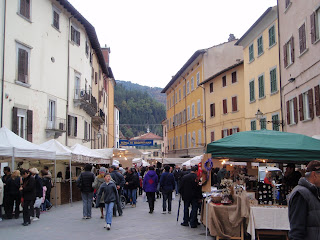 I enjoyed the sagra much more than the chocolate festival, mainly because it was simple and local...no vendors selling name brand anything. Just plain folk selling plain food: the real deal. I'm looking forward to attending more sagras when I can.