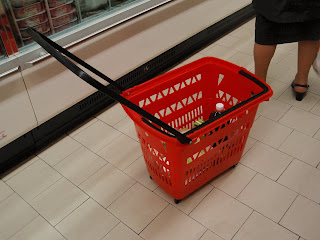 A typical shopping cart in Firenze

What does that mean? Believe it or not, it states that it is cheaper to buy groceries in Florence than any other city in Italy (according to recent surveys). In particular, shopping at the Coop store is less expensive and convenient. The Coop is a large chain with big stores, much like Dillons and Safeway stores in the U.S., and are usually located in the periferia, or outer areas of town. But there's one not far from me, so I'm going to check it out and see what the prices are like. I can certainly agree that grocery shopping is inexpensive here, even though I do most of my shopping at small stores. In addition, buying fruit, vegetables, and cheese at the open market is usually a bargain.

As for other kinds of shopping, I've also been lucky with clothes. In fact, once in awhile I come across an item of clothing, sometimes brand new, just lying on the sidewalk in front of me. So far I've found a scarf, a nice sweater and a lovely new handkerchief. Unexpected gifts! I've bought several used sweaters, a scarf and a pair of gloves for 3 euros each. I'm looking for a nice pair of boots, and am hoping to find a bargain, though I'd really like to get pair that is made to fit my feet.

One of the things I like most about living here is that Italians know how to "make do" with what they have. I've always lived that way, and enjoy being in a culture that fosters this mindset instead of one that thrives on having an excess of goods and replacing things before they even have a chance to wear out. "Less is more" is definitely the Italian way of life, and mine as well.

---------
Update: 2 novembre
I went to the COOP store today. What a wonderland! I wish I'd known about it when I first arrived in Florence. More selection, lower prices, and no need to carry a "member card'' for discounts. However, shopping is even cheaper for Coop members. It's a good 15- minute walk from my apartment, but I'll be going there often from now on. Guess I need to get one of those nifty wheeled shopping carts that I see so many people using.
Posted by marybeth at 11:41 PM