I had another busy weekend, walking from one end of Florence to another and back again, then heading out to Leonardo da Vinci's home in nearby Vinci.

On Saturday, I decided to challenge myself by going to Parco delle Cascine, on the other side of town. I walked and walked, took a bus and walked some more, and finally arrived at my destination, a huge park along the Arno river. 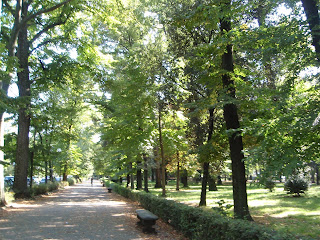 I went to see an exhibit called Ruralia, a Festival of Florentine Agriculture, which is similar to the county fairs back home. Many vendors were there to sell homegrown/homemade jams, honeys, produce, meats, cheeses, wines and olive oil. 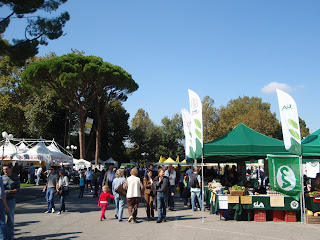 There were also petting zoos, horseback riding, displays of live farm animals and stuffed wild animals, mushrooms, truffles, etc. I bought some fresh pecorino cheese and Finocchiona, a type of salame made with fennel seed that I discovered I liked earlier this week in Chianti. I also found a tin of Chianti Classico olive oil that will be safe to bring home in my suitcase. Over 100,000 people attended the 3-day event.

On the walk back, I discovered that Florence's tram line runs through the park, and using the still-valid bus ticket I'd bought earlier, I took the tram back to my side of town. Sure am glad I didn't have to walk! Later I met with a new conversation partner that I'd met through the Paperback Exchange store that I frequent, and we walked around the centro storico and talked for several hours. It will improve my Italian to have a fiorentina (Florence native) to talk with while I'm here.

On Sunday, Massimo, Sofia and Erika drove down from Bologna to spend the day. I met them at the Sant'Ambrogio parking lot near my apartment, and we walked down to Palazzo Strozzi to see an art exhibit: Bronzino: Artist and Poet at the Court of the Medici, which was quite impressive. I did not know much about the artist previously, but really enjoyed the exhibit. To learn more, click here: Bronzino

Sofia had made fresh tortellini, and brought me some, which was a wonderful surprise. I'd been able to watch part of the tortellini-making process while talking to Massimo on Skype the night before, so was thrilled to be able to taste it. I can't wait to fix it for dinner tonight! 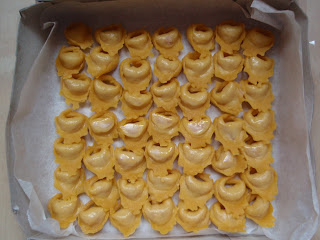 After the Bronzino exhibit we walked around the centro storico to see the Duomo and Piazza Signoria, then made our way to Piazza Santa Croce, where an International Festival was taking place, with many vendors from all over Europe: cheeses, chocolate and lavender from France, bulbs from Holland, meats from Germany, and much more. Sofia and I bought some cyclamen plants from Holland, for only 1 euro each. We stopped to eat lunch at a German food vendor that featured grilled wurstel.

After our meal, we headed back to their car and drove west, into the hills outside of Florence. We made our way to Vinci, where there are several museums devoted to Leonardo da Vinci's inventions. 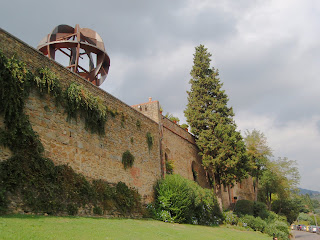 We saw many models of his machines, and climbed a tower to see a panoramic view of the area. 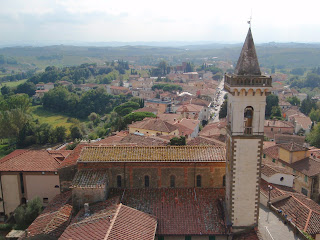 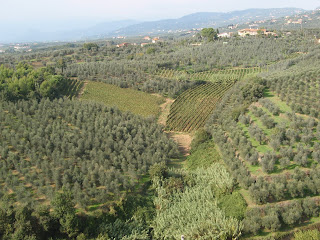 After the museum, we drove up the hill to a smaller town, Anchiano, where Leonardo was born, to visit his family home. 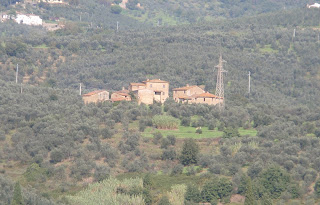 It's hard to imagine how he was able to master so many fields of art and science, but there's no doubt he's left an indelible imprint in history. 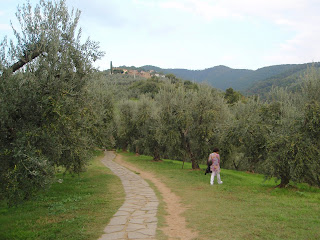 Sofia walking in the olive grove near Leonardo's home.


It turned out to be a great day for a drive through the hills west of Florence, e sono molto grata (and I'm very grateful) to Massimo, Sofia and Erika for making the trip possible.
Posted by marybeth at 8:33 AM