What started out as another pleasant adventure on Saturday turned into a near-nightmare by the end of the day. Or so it seemed at the time. 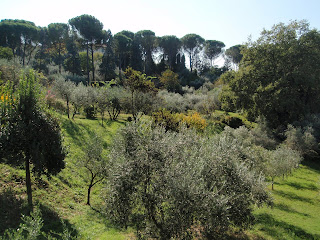 Along Via del Benedetto Fortini

I'd run across a brochure about several walking paths in the hills south of Florence, and due to the enduring nice weather, I decided to try the longer route to Montici (7.3 km, 4.5 miles), starting out at 10 am to give myself plenty of time. My first mistake was not checking the route out on my maps beforehand to see where I was going; I trusted the information in the brochure. Unfortunately, some tourist brochures in Italy have outdated information, so it's always wise to double check things out before planning your itinerary.

I headed to the bus stops near the train station, as indicated in the brochure. But the bus lines have been re-routed in the past year, since most buses are no longer allowed in the centro storico (historical center) of town. I stopped in at the tourist center to ask for help, and was told the information in the brochure was correct. But the stops on the bus line did not match the stops listed in the brochure, so I was hesitant to take one. I decided to go back to the apartment and regroup. After looking at my maps, I realized I could take a bus near the apartment to get to the starting point of the walking route, and decided to try again, even though it was 1 pm by then. I'd made arrangements to meet a friend at 4, and the brochure said it would take 2.5 hours to walk the route, so I thought I might be able to finish it in time. It was worth a try.

The bus took me where I needed to go (Brava, Mb!) and the first part of the route was all I had hoped for: quiet, winding roads leading to panoramic views, with many historical villas to view along the way. 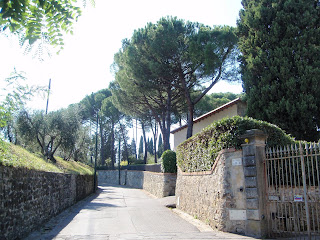 Along Via del Pian dei Giullari

It was peaceful, beautiful and refreshing. Ah, nature! This pleasant course continued for nearly two hours, so I was hoping the return route would go faster. Unfortunately, is was at this point that things began to go awry. 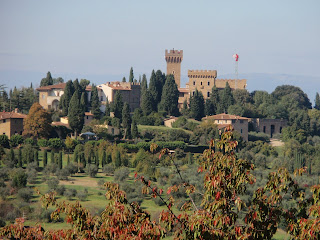 First, the map skipped some important information, leaving me unsure of which road to take to access the main road back to town. I started down an unmarked country road, but it was very steep, and I was unsure it was the right one. I turned back to find someone who could point me in the right direction. The first person was a young man, who wasn't sure where the street I needed to find was located. The second person was an old woman who spoke in dialect, so I wasn't sure I was understanding her directions. The third person assured me that the steep road was the one I needed to take down the hill. In the meantime, I had walked up and down several steep roads, and had wasted over 30 minutes. One of my friends called me while I was in this maze, and when I told him I was lost, he asked, in jest, if he should call out the forest rangers to rescue me. Well, not yet. 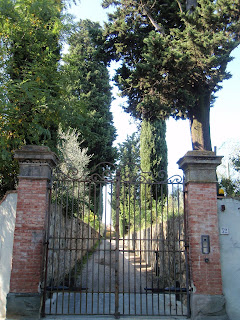 I made my way down the steep road, only to discover that the main road back to town was like a tiny, narrow highway...with lots of traffic and no shoulder on the road. Pericoloso! (Dangerous!) Cars whizzed by, and I could feel them, within inches of me. At one point, something flew off of a truck and could easily have hit me, if several cars hadn't been in front of my path. And villas? I could care less about seeing villas, since I was more worried about getting back to town safe and sound. I sent a text message to my friend that I would be 30 minutes late to our meeting. After nearly 40 minutes on the "highway," I turned onto a broader stretch of road. It had less traffic, and I felt safer, but still had a good ways to go. It was then that I realized I had lost the map from the brochure, so I wasn't sure how to get back the rest of the way. I knew the name of the road, but I wasn't sure how far to go on it before turning towards Florence. 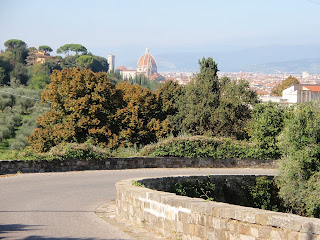 I decided to rely on my intuition, judging correctly the direction that would lead me back to town, and I found a street I recognized, though it was not the way that was shown in the brochure. I found a bus stop that would take me across the Arno, and called my friend to tell her of my whereabouts....by now, I was an hour late to our meeting. I met her at Piazza Beccaria and we walked back to my apartment, where I was ready to relax with a glass of Chianti wine.

By the end of my journey, I had walked for nearly five hours, and I was exhausted. But another day, I know I'll be ready once again to try the second walking route in the brochure, which leads to Arcetri, where Galileo spent his final days.

Today will be a day of rest. Tomorrow I head to the Trentino-Alto Adige region, in the northeast corner of Italy, to spend a few days with my friend Lucia. I'll be in the mountains not far from Austria, in an area of Italy I've never seen before. It's a 3-hour train ride and another hour by car to her home in the woods east of Trento. Another adventure!

For more photos from the day, click here: Montici#
Posted by marybeth at 12:11 AM

Email ThisBlogThis!Share to TwitterShare to FacebookShare to Pinterest
Labels: Montici

I am enjoying discovering the lesser known areas of Firenze virtually with you, but sorry you got lost yesterday, bad luck.