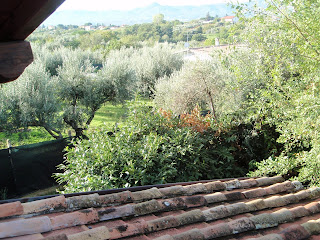 view from bedroom window in Zagarolo

I've been on a roller coaster ride during the last month. My usual work projects were minimized, which wiped out my funds for renting the apartment in Firenze that I'd lined up for three months. I'd been having some reservations about spending so much time in the city during the height of the tourist season and hot weather, and the loss of income made me realize I would have to scrap my original plans and see if I could go to Italy in the fall instead. Bummer!

However, traveling in the fall would also be complicated. The apartment I had lined up for the summer is not available in the fall, and going though an agency would be expensive. If I went in the fall, I could only stay 6-8 weeks, instead of the three months I was hoping for. I was starting to feel resigned to the fact that I might not make it back to Italy at all this year. Che peccato!

Then a few days ago, I got an email from a friend who lives near Rome, asking if I would be interested in housesitting for her in May and June, while she travels to Canada. The housesitters she had lined up last month had backed out, and she knew that my plans had also gone awry. I'd met Deborah in 2009 through a housesitting website that matches people wanting to housesit with people needing someone to look after their house or animals. I was unable to housesit for her that year, but traveled down to visit her and see what it would involve to take care of her house and cats. As a result of that visit, we became friends and have stayed in touch. While I was in Rome last fall, we spent an afternoon together roaming the city and eating some wonderful food.

To make a long story short, I decided that housesitting for her would be the perfect solution to my dilemma. I won't have to pay for lodging for two months, will have a different kind of adventure, and will be in an environment where I will have to rely on Italian in order to communicate, the best way to improve my language skills. With a DSL connection already set up in the house, I can easily do my online work projects while I'm there.

I'll be staying in a sweet little house in the country outside of Zagarolo, a small village east of Rome, that is easily reached by a 30 minute train ride. The area around the town boasts hazelnut and olive groves, and there is a vineyard across the road from Deborah's house that produces a well-known white wine, and I've been told I can take long walks through the vineyards. I'll have a car to use, which will be an interesting new challenge. I'll have a 1.5 km walk into town, and no easy access to gelato and other yummy foods that constantly tempted me in Firenze. I'll be able to see the seven hills of Rome from my bedroom window. Che fortuna!

I'll be heading out a month sooner than originally planned...within 6 weeks I'll be leaving for Rome and another 3-month stay in Italy! After Deborah returns from Canada, I'll have 3 more weeks to travel around, visiting friends and exploring some new areas of Italy. I hope to make it Abruzzo for the first time.

You just never know what might be lurking around the corner. Sometimes the best laid plans can be surpassed by an unexpected detour that could easily be overlooked or avoided. But I've learned that when opportunity knocks, it's important to jump in and make the most of it!
Posted by marybeth at 2:31 PM

Oh definitely jump in and make the most of it, I am happy things have turned out well for you after all.