Perugia and the Eurochocolate Festival 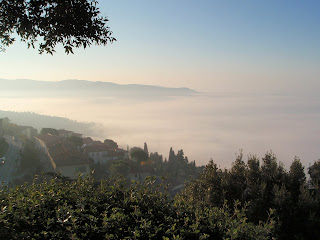 A sea of clouds as seen from Cortona

The next day I woke up early to catch a train to Perugia. There was only one morning train, and I'd have to wait four hours for the next one, so I wanted to make sure I caught the early train. It was a clear day in Cortona, but the valley below was covered by a sea of clouds. It provided an amazing view.

I met a couple from Texas in the train station, and we sat together during the 45-minute train ride south to Perugia. They were headed to Athens, where the husband plans to run a marathon at the end of the month, but they were spending a few days in Italy on their way to Greece. In Perugia, we boarded a bus that took us up a long, steep hill to the city center, where the Eurochocolate Festival was being held. I parted ways with them once we reached Piazza Italia in the centro storico. 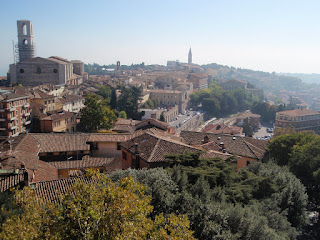 A view of Perguia from above

I'd heard about Eurochocolate for several years, but this is the first year that I managed to attend. I was hoping to see an exhibit of Kallari chocolate that my niece in Ecuador has been involved with for many years, but they didn't seem to be there this year. To be honest, I was disappointed in the show and would like to see Perugia sometime without all the vendors crowding the streets. I love chocolate, but eating a small amount at a time is sufficient, and I wasn't in the mood to spend much money on expensive chocolate when I can get it freshly made just down the street from me in Florence anytime I like. (I don't buy it there, either, as it's so expensive!) 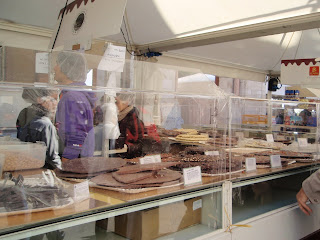 Discs of chocolate in many flavors

They had a gimmick where you could buy a "ChocoCard," which entitles you to 10 tastings or gadgets at various booths in the festival. It only cost 5 euros, and it seemed a good way to make a tour of the different booths. Well, three of the 10 booths were closed, and three of them gave samples of things like chocolate shampoo and a new brand of artificial sweetener. So there were actually only four chocolate "tastings." After a while, the smell of chocolate was a bit nauseating, and there were bees swarming around many of the exhibits, which was another reason to avoid them. 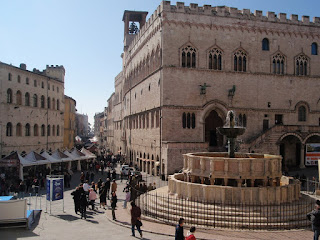 The historical center of town was lovely and interesting, but I only visited a few of the buildings, as I was there for just a few hours. I'd like to go back with someone and see the city in more depth, without the crowds. The highlight of the day was a cioccolata calda (hot chocolate) that I ordered from one of the local shops. It was made with dark chocolate, orange and cinnamon, and it was one of the most heavenly, delicious drinks I have ever tasted in my life. Truly decadent, and I enjoyed every sip of it!

I enjoyed my time in Cortona and Perugia, even though Eurochocolate was a bust, secondo me (in my opinion). Many people don't mind paying 5 euros for a few ounces of the stuff, but I'm not one of them (unless it's free trade, organic dark chocolate, that is). The big vendors at Eurochocolate are multinational brands that can be bought in many cities around the world. I prefer festivals that feature local foods and products at reasonable prices, making it more affordable for anyone who attends and more profitable for local artisans.
Posted by marybeth at 6:31 AM