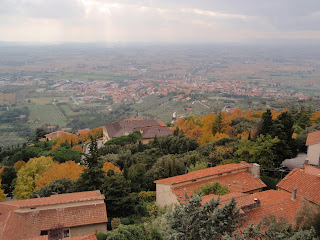 A view of Camucia and the valley below Cortona

On Wednesday morning I caught the train to Cortona, a hill town about an hour south of Firenze. Cortona was made famous by the book and movie, "Under the Tuscan Sun," as the town that Frances Mayes fell in love with and decided to move to. I almost didn't make the train, as I bought my ticket from a machine for the first time and had trouble understanding the instructions. The forecast had promised "brilliant sunshine," but it was cloudy and cold, and it started pouring as the train pulled out of the station.

Halfway through the journey, the train porter came through to punch our tickets. A young man ahead of me got into an argument with the porter, something about missing a train because it was late and demanding a refund. He badgered the porter until he got his money. Then the porter turned to me, and charged me a 10 euro fine for having a 2nd class ticket in a first class carriage. I had boarded the train in 2nd class, but could not open the door to the carriage, so went into the next carriage, not realizing it was 1st class. I've made that mistake before, but have never been fined. It seemed that the porter was "kicking the dog" after being berated by the guy in front of me.

I enjoyed watching the hazy, foggy countryside: the muted fall scene was like a watercolor painting passing by me. Up ahead the sky was clearing, and I hoped to find sunshine in Cortona. I was the only person to get off the train in Camucia-Cortona, and found an empty station as well, which seemed quite odd. I thought Cortona was a popular place on the tourist scene. Before leaving the station, I bought my ticket to Perugia for the following day, from another machine that took some time to figure out. Then I found a bus to get up the hill to Cortona. 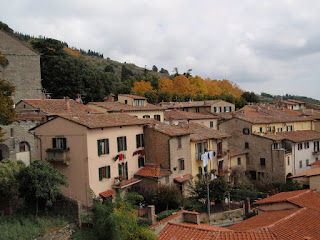 For the first time in my travels, I had not made any lodging arrangements in advance, but had several suggestions from a Rick Steves book. After arriving at Piazza Garibaldi in Cortona, I headed down to Casa Betania, a former convent, about 5 minutes down a steep hill. The note on the door said that they were closed for several hours, so I would have to return. 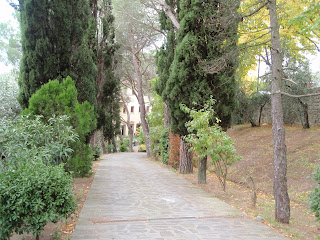 The entrance to Casa Betania

I went back up the hill to town and did some exploring, and stopped to eat a bowl of ribollita, a Tuscan soup made with beans, vegetables and bread. It was pretty chilly in Cortona, so the soup really hit the spot. 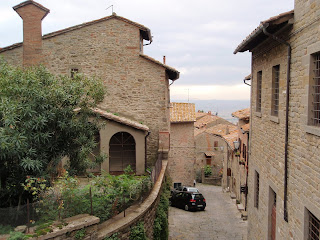 One of the steep streets in Cortona

I made my way back down to Casa Betania, found someone in the office, and when I asked if there was a room, the custodian, a very nice man, said: Purtroppo, no. (Unfortunately, no.) My response: Non è vero. Stai scherzando! (That can't be true. You're kidding!) The place was huge, and no one was in sight. How could it be full? He looked at the ledger, then back at me and said: Forse, forse... (maybe, maybe....). Then he called someone to ask a question, and when he was done, took some keys from the wall and led me down to the hall, offering me a choice of two single rooms, for 32 euros. (When he took down my passport information, and noticed my date of birth, he remarked that I seemed much younger than my age, which is always nice to hear!) 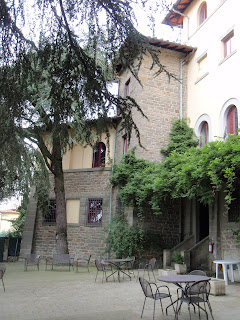 Casa Betania, by the terrace

It turns out that 50 French schoolchildren had taken over the place for a week, and the two rooms had been reserved, but were no longer needed. The kids were out on an excursion, which explained why the place was so quiet. There are 35 rooms, a huge terrace, and many large rooms for eating, meeting and hanging out. I was happy to stash my backpack and head out to explore more of the town, and by the time I left the building, the custodian was no longer in the office. It seems I was lucky to find him there at all that day! 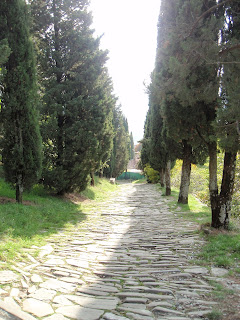 An ancient path down from the top of the town

I climbed a steep hill to the top of the town, and by the time I reached the summit, the sun was out, which made everything seem worthwhile. Later, I found a tree-lined city park, just perfect to stroll through as the sun was setting. The trees were changing colors, and the sun filtering through the leaves was lovely. Like the rest of Cortona, very few people were in the park, and I seemed to be the only tourist among them. Once it started to get dark, I headed back towards the center of town to find a place to eat. Many restaurants were already closed for the season, so I settled for pizza and a glass of wine, then headed back to my room. 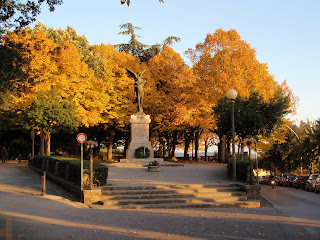 The entrance to the city park

I hung out for a while in the living room, watching a documentary on Italian tourism on cable tv, and had some tea and biscotti that were available for guests. The place was warm and cozy. The kids had come back, and I could hear their voices echoing in the halls, but they never bothered me. Casa Betania is an amazing place with very modest prices. Here's more information: Casa per ferie Betania

Traveling to Cortona was initially stressful for me, but in the end, as usual, everything worked out, and I'm glad I had the gumption to go. It was definitely worth the effort!

Email ThisBlogThis!Share to TwitterShare to FacebookShare to Pinterest
Labels: Cortona