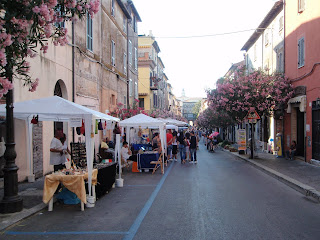 When food is in season and plentiful, Italians celebrate with a sagra, which is basically a food festival or fair. With summer upon us, the sagra season is in full swing, with nearby villages offering various types of food specialties to entice people to celebrate with them. Some examples: Sagra del Cinghiale (wild boar), Sagra della Fragola (strawberries), Sagra della Lumaca (snails), Sagra della Vongola (clams), and in Zagarolo, the very unique Sagra del Tordo Matto.

The sagra is usually held in the main piazza, and vendors set up stalls to sell all kinds of fare, from local food to candy, clothes and jewelry. Usually a communal meal is prepared, and long tables are set up in the piazza. Larger sagre have musical entertainment or some type of competition. The sagra season usually starts in June and continues through the fall months.

The preparation of Zagarolo's Tordo Matto is closely linked to the rural economy of the country. Traces of Tordo Matto go back to the 1800's, thanks to some photographic evidence depicting the first "crazy thrushes" cooked on a spit. From an essay written in 1820 it is clear that the spread of this dish was mainly due to a large horse and donkey population. It was a time when Zagarolo lived only for agriculture and sharecropping. The thrush was a delicacy for the richest, and when farmers ventured into the woods in search of animals to hunt, they seldom met with success. As a result, they were forced to kill older animals used in the fields, like donkeys or horses. And since the meat of the horse and the donkey was too sweet, they created a way to make it more spicy and appetizing.

The legend of the "mad thrush" goes back even further, to the sixteenth century when Zagarolo was under the domination of the Colonna family. A wounded soldier took refuge with a farm family who offered him wine and horse-meat rolls made with lard and spices. The drunken soldier began to play the fool and kept repeating the word "drossel" or "thrush" in German, and because he seemed crazy, the meat rolls evolved into "Tordo Matto". Whatever the origin, each year the Zagorolesi honor the tradition by having a sagra where they serve this dish.

I've been to a few sagre, and some are more interesting than others. I especially enjoyed the Sagra delle Castagne (chestnuts) last fall in Marradi.

I missed out on the main events of the Zagarolo sagra, which happened on Saturday night, because I was unaware that it was going on. But today I made sure to be on hand for a lesser version of the festivities. As sagre go, it was small and uneventful, but I was there early in the evening: I didn't stick around for the communal cena (meal) and musical entertainment, scheduled to start after 9 p.m. Instead, I took a pleasant passeggiata through the town and returned home. My main goal was to have a taste of the legendary "tordo matto." Here's what I got: a small meat roll between two slices of bread, for 3 euros. Nothing fancy here. Actually, the meat roll was quite tasty, though it could hardly serve as a meal. Still, I can imagine how it might substitute for a roasted, stuffed bird in a pinch. 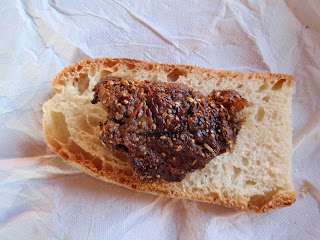 Much later that night, I heard fireworks for what seemed an interminable amount of time, more than an hour, so I'm guessing that things picked up at the sagra after I left.

When I told my friend Massimo in Bologna about the sagra, he said that the tordo brings to mind another comic event for most Italians: a scene from a movie by the comedian Paolo Villaggio, who plays a character called Fantozzi, a "common man" who continually gets into trouble. Here's a link to a scene that shows Fantozzi attempting to eat il tordo for the first time, while his upper class companions look on in disgust.

Goditi! Enjoy!
Fantozzi - Il Tordo
Posted by marybeth at 5:36 AM