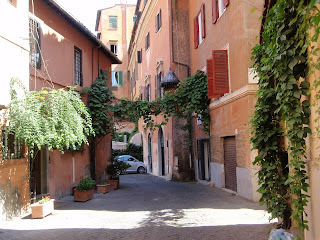 I have to admit, it's a bit of a thrill to know my way around Rome now. With such easy access to the city, I'm glad I've been able to take advantage of the opportunity to explore, and at least once a week I spend the day in Rome. I have a long list of places I still haven't seen, and hope to have more chances to be a tour guide for friends in the future.

I needed a break from my work routine, so today I went to Trastevere, a quartiere or area of Rome that is known for its ''Bohemian" atmosphere. My goal: to locate a bar that serves drinks in chocolate shot glasses. Davvero! (for real!) I recently read about it in a blog about life in Rome, aptly entitled An American in Rome, and decided I needed to check it out.

I caught an early train, then at Termini I jumped on the crowded H bus, and was in Trastevere by 8:30 a.m. It was quiet, cool and devoid of people. In fact, it seems that this area of Rome doesn't "open" until about 11 a.m. Trastevere is known for it's night life, so I would be missing out on many attractions in the area. 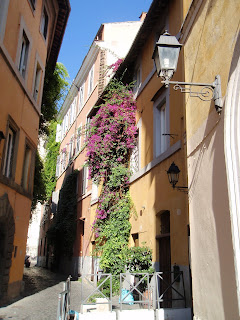 Case in point: while exploring the winding streets, I located the bar that serves wine and chocolate, only to discover that on weekdays, it doesn't open until 7:30 p.m.! NOT FAIR! My plan was to spend the morning in Rome while it was still relatively cool, and hightail it out of the city about 2 pm, when the heat begins to get oppressive.

I had hoped to do some browsing and shopping in the quaint stores in Trastevere, but since they weren't open, I visited several churches instead (only three out of 45 in this part of Rome!) . The first was Santa Cecilia in Trastevere, which has lovely mosaics and an interesting crypt under the church. 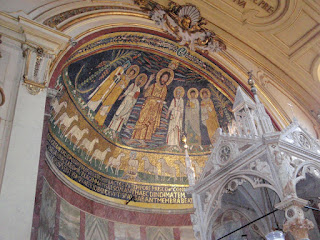 Another church I visited, the most well-known in the area, was Santa Maria in Trastevere. Note the similarity of the mosaic scene. It is one of the oldest churches in Rome, dating back to the 3rd century A.D., and is perhaps the first in which mass was openly celebrated. 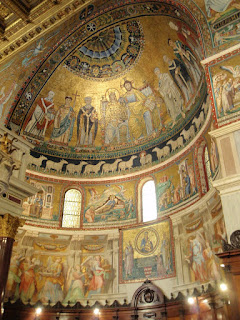 And the third church, Santa Maria della Scala, honors a supposedly miraculous icon of Mary. According to Wikipedia, "Tradition holds that the icon, when placed on the landing of a staircase of a neighboring house of a mother who prayed before it, had cured her deformed child. "

Besides the beauty of the mosaics and the tranquility of the churches, another benefit is that they were cool and virtually empty of tourists. 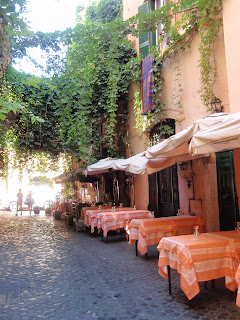 I wandered around Trastevere for several hours, enjoying the cobbled, quiet streets, stopping for gelato at one of the few open stores, and spied this advertisement at a liquor store. 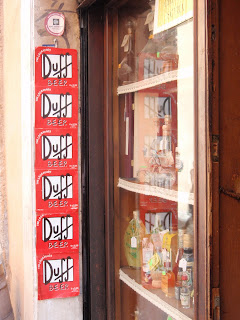 Yes, it's true: a version of Duff beer is sold in Italy. It's curious, but the Simpsons (I Simpson) are quite popular with Italians. Another curiosity: Late Night with David Letterman is shown on cable TV, but not the Tonight Show, it seems. I'm wondering why: must be something about the irreverent humor that appeals to the Italian psyche. It's no wonder I fit in well here!

About 1 pm I took a bus over to the Jewish Quarter of town and wandered around, looking for a nice place to have a good Roman meal. (I heard later that Woody Allen had been there the day before, scouting locations for his next movie, now being filmed in Rome.) However, the menus were pricey and the listing of heavy pastas and meats didn't appeal. I headed back to Termini on another crowded bus, and crossed over to a pedestrian area on via Gioberti where many open-air trattorias were vying for hungry tourists to sample their fare. I stopped at one that had a musician, and ordered a meal of Bruschetta al pomodoro (toasted bread with tomatoes), Calamari arrostiti (roasted calamari), Fagolini con limone (green beans with lemon), and vino rosso, a glass of red wine. Simple, but squisito, exquisite. A British couple from Cambridge sat next to me and I spent the next 90 minutes lingering over lunch and conversation with them.

As they heard the story of my life and travels in Italy, they found it quite extraordinary. Living for free in Italy? How is that possible? Yet to me, it's simply MY LIFE: a way of being that has come about from taking risks and making choices that I feel drawn to. It's been a five-year process that has brought me to this point, and I'm fortunate in many respects to be able to live as I do, but it doesn't seem extraordinary. And now I'm curious to see what's ahead for me in the next five years. Chissa? (who knows) Anything is possible!
Posted by marybeth at 10:00 AM