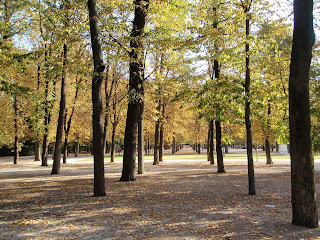 There are many contrasts between my home in Lawrence, KS and my home in Florence, Italy. One difference I've noticed lately is that very few people in Lawrence take the time to walk anywhere, except to take their dogs out for a stroll. Some people walk for exercise, like me, or to get to a nearby store, but pedestrians on the whole are few and far between in my town. I want to continue my daily habit of walking 1-3 hours, as I did in Florence, but it's more of a chore here because it's boring and very lonely.

Today I walked for nearly an hour along a bike path and I only came across one other person walking, and a group of 6 runners. I've walked downtown several times this week, which is about a mile (1.6 kilometers) from my house, and did not see anyone else walking, except when I was near stores in the downtown area. It's no wonder that I usually find winter to be a very lonely time, as people keep to themselves in their houses and the only time I see anyone is when I seek them out. It's not as lonely this year, however, since my son is living at home: at least I have someone to talk to when he's around.

So even though I enjoy being home, and having sunshine nearly every day, I miss the sense of community that I feel in Florence. Whenever I go for a walk (fare la passeggiata), there are always people around, and I never feel lonely. In Florence, it's common to see people walking at all times of the day and night. It's also necessary, especially in pedestrian areas where few cars or buses are allowed.

I also enjoy the way people gather in the piazzas in Italy, or sit together on benches in the park to chat, which is rarely done here. Even in warmer weather, I rarely see people sitting in the parks in Lawrence, unless there is a special activity going on. Americans don't have the habit of gathering in the piazzas that Italians do, and I miss that aspect of the Italian culture.

One of my favorite parks in Italy is the Parco Ducale in Parma. I had the good fortune to stay in Palazzo Ducale, once the home of Napoleon's second wife, Maria Luigia, for several weeks in the fall of 2007 and 2008, as one of my friends is the commander of the carabinieri (Italy's military police force) for the Province of Parma. The park surrounds the Palazzo, which is now a carabinieri compound and off limits to the general public. But the park itself is open and widely used by the Parmense. 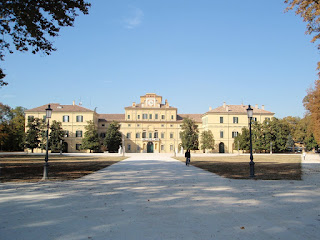 Many of the rooms of the Palace have been turned into offices, while others lie vacant, especially the formal rooms with frescoed walls. Other rooms have been made into flats for 15 of the carabinieri and their families, including my friend Paolo. There are also 3 guest rooms, referred to as “La Foresteria,”, where I stayed. My "room" was actually a suite of rooms, quite elegant and comfortably furnished, though very inexpensive. Then last year I spent a few days in Parma at the flat of another friend, and made sure I spent an afternoon in Parco Ducale during my stay. 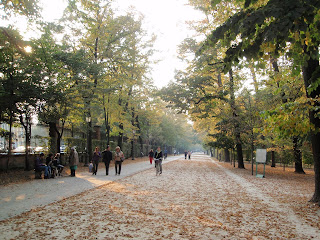 I spent many hours in Parco Ducale for three years in a row, and found great solace in the expanse of trees that surrounded me there. Parma has free wifi spots in many areas of town, including Parco Ducale, so it was an easy place to catch up on email with my netbook. There are many other reasons I like Parma, but Parco Ducale is the main one. It's the first place where I began to notice how Italians use parks in a different way than most Americans do, at least in my town.

It seems that most Americans go to the park to "do" something for a special occasion, while Italians often just go to the park to "hang out" - to sit and chat, read, stroll with babies or elderly parents in tow, or have discussions. Sure, they also go there so their children and dogs can play, but I've seen more use of the parks on a daily basis in Italy than I ever see in my town, even in warmer weather. Reminiscing about Italian parks reminds me of what I have to look forward to when I return to Italy next May.

Interesting post, nothing compares to the Italian tradition of passegiata :)