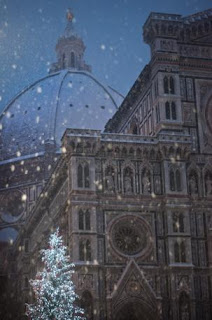 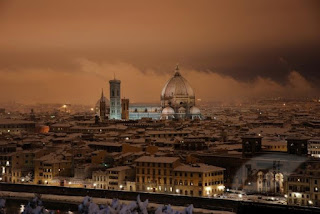 I received an invitation to a Christmas dinner tomorrow night in Firenze with the Meetup Group I joined while I was in Florence; they'll be eating at a restaurant just down the street from my apartment. Wish I could go! I'm keeping up with the news in Firenze, and today i giornali italiani (Italian newspapers) are filled with stories and images of the snow that is blanketing Italy, from the North all the way south to Calabria. Even Sicily, and the islands of Capri and Ischia have snow this week! Che bella! After nearly two months of rain, now Italy is being blanketed with the white stuff.

Since I'm unable to see the snow in real life, I've found some photos of the snow in Florence to share.

Here's a video with interviews asking what people think of the snow. Most people seem to enjoy it: Che bello! (Howbeautiful!), Mi piace tanto! (I love it!), but a few say "L'odio!" (I hate it) or Non mi piace (I don't like it). And in the background, Dean Martin sings the playful tune, Let it Snow!

In the end, snow makes everything more festive for Christmas, and I'm hoping it snows here next week!
Posted by marybeth at 10:07 AM

Luca Magri said...
This comment has been removed by a blog administrator.
Tuesday, March 22, 2011