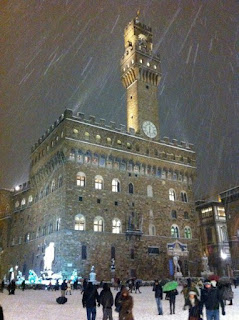 
From the album: Snow in Florence December 17, 2010 by Apartments Florence

Firenze was blanketed with 30 cm. (11 inches) of snow within 4 hours on Friday, creating major chaos throughout the city. In fact, all of Tuscany was affected by the snow, and airports in Florence and Pisa were closed to all traffic. Trains could not run due to ice on the tracks and streets were jammed with cars, causing major traffic headaches. Though a snowfall of this size is not rare, the city was unprepared to deal with it, even though an alert about the snow forecast was posted on December 13th, several days in advance.

I talked with my friend Patrizia in Florence yesterday; on Friday night when she was returning from work in her car, it took 5 hours instead of the usual 40 minutes to get home. Mamma mia! Tall trees were falling over from the weight of the snow and there was general chaos. She heard on the radio that cars would be allowed to drive through the city center, which is usually only open to taxis and residents of that area, to allow Florentines to get home as quickly as possible. But when she drove by the Duomo, her car was the only one in motion.

Now the streets have turned to ice, and large portions of le autostrade outside of Florence are closed. Residents have been warned to stay home and off the streets. Accusations of responsibility are rampant: how did it happen that no pre-blizzard precautions were taken?

On the other hand, many are enjoying the snow and the beautiful photo opportunities that are possible. I'm wishing I were there to see it myself. Well, not the ice. Instead, the temperatures in my town are expected to reach 50 degrees F (10 C) tomorrow. As long as there's sun, I can dig it.
Posted by marybeth at 8:22 AM