I've recently been toying with the idea of making a pilgrimage of some sort, fueled by several movies and books that I've come across this year. The first one was Wild, which recounts the experiences of Cheryl Strayed as she hiked the Pacific Crest Trail, some 2,600 miles along the West Coast of the U.S. After seeing the movie, I read the book, and was inspired by the idea of transformation that often occurs in such an undertaking.

I also attended a lecture at the local library that was given by a woman who had recently hiked the Appalachian Trail, nearly 2,200 miles along the East Coast of the U.S., and followed that up by reading Bill Bryson's book, A Walk in the Woods. (Now a movie, too!) Though I found the stories interesting and in some ways, inspiring, it was not enough to encourage me to consider these routes for myself. For one thing, they lack the spiritual connotation that I'm seeking and they do not have the long history of paths like the Camino de Santiago in Spain, which has served as a pilgrimage route since the Middle Ages.

I first learned of the Camino several years ago, from a movie called The Way: the path starts in the southwestern corner of France and travels 500 miles westward across northern Spain, to the town of Santiago di Compestela.  More recently I saw another film, this time a documentary called Walking the Camino, which only served to further my interest. And best of all, there's a YouTube video made by an Australian man, who records his own experience as he walks the Camino. It's also called The Way, and is available in its entirety (75 minutes) on YouTube: 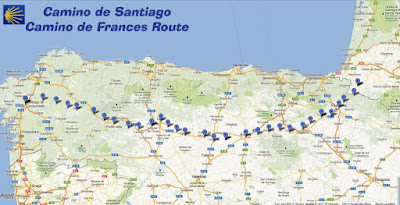 I've followed up my interest in pilgrimage by reading several books written by people who have actually done pilgrimages. The first, A Sense of Direction: Pilgrimage for the Restless and the Hopeful, by Gideon Lewis-Kraus tells of three pilgrimages that the author has completed, including the Camino and Shikoku routes, the latter a 750-mile path that circles the island of Shikoku, Japan, while visiting 88 temples along the way. I thoroughly enjoyed this book, written with more depth and skill than either of the books by Strayed or Bryson. 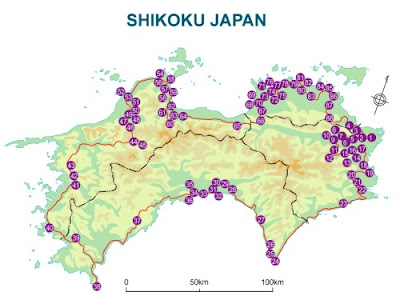 And yet, what struck me about his walks, that was unlike the hiking done on the U.S. trails, was the inherent focus of the path itself,  which is a spiritual pilgrimage, even though most people who now complete the Camino and the Shikoku are unlikely doing it for religious reasons. On the Camino, walkers stop at shrines and churches along the way, and are housed and fed in hostels run by volunteers. On the Shikoku, there are 88 temples to visit, and rituals to follow at each temple. There is also a pilgrimage "costume" of sorts, to designate one's role as a pilgrim. So even though one is not on a religious pilgrimage, it is a pilgrimage nonetheless, because of the path itself.

A second book, Walking Home: A Pilgrimage from Humble to Healed by Sonia Choquette, documents the journey of a 50-year-old woman on the Camino. She was intent on being alone for most of her journey, unlike Lewis-Kraus, who did the Camino with a friend. Her approach was more New Age-oriented, but still a good read.

In a passage that resonated with me, Lewis-Kraus writes that: "I'm less and less sure that there really is a distinction between a tourist and a pilgrim. Both are in search of a spell of unusually memorable days. The pilgrim hopes that the experience will change her in some way, but the experience changes you only insofar as all memories change you. The tourist, like the pilgrim, hopes that these moments will linger."

I am letting these thoughts and images meld and settle in my mind, body and heart. I know I have been a pilgrim in my travels so far, on a search to understand other cultures, as well as my place in the world. I know these books, images and thoughts are leading me somewhere, and I will let them guide me. Who knows when or where?

Vincent walked the Camino de Santiago 2 years ago and his friends in their 80's are on it now. They have a blog & I'll send you the link.

thanks, I'd like that! Send it to my email.