After Guell Park, Casa Batló is my second favorite Gaudi site. There is so much to share about this house that I'll do it in several posts. Located on Passeig de Gracia, a prestigious area of Barcelona, this structure was redesigned by Gaudi between 1904-06. Its original appearance was unattractive to the Batló family, but as they liked the location, Gaudi was hired to remodel it. Also known locally as Casa dels ossos (House of Bones), because of the skeletal aspects on the facade, it has many other distinctive features. In 2005, Casa Batló was named as a UNESCO World Heritage Site.

As you can see, the balconies appear to be ghoulish masks, while several large windows are girded by what appear to be bones.


Depending on the time of day, the season or the weather, Casa Batló can appear grey and gruesome or magically alive with color and whimsy.

Pieces of colored glass and ceramic mosaics on the surface of the facade create an undulating effect, as in Monet's water lily paintings, or like ripples on a lake. The large glass discs were made by Gaudi and his collaborator Jujol during their sojourns in Mallorca. The house is awash with curves, swirls and colors that clearly reflect how Gaudi was inspired by his love of nature and the sea. The wooden staircases and doors are nearly all unique and fashioned with exquisite craftsmanship.

As at other Gaudi sites, an audioguide is included in the price of admission, giving visitors free rein to spend as much time as they like wandering through the building. Most of the building is used for apartments and offices, but the piano nobile, or main floor, can be viewed, as well as the attic and the roof. Gaudi was inspired by nature, favoring curves to straight lines and the house has an overall organic effect.

Though Casa Mila seems to be more popular with tourists, I found Casa Batló to be far superior and interesting, as it gives a better sense of Gaudi's design style and use of space. It's a wonderland, and every part of it was designed by Gaudì. 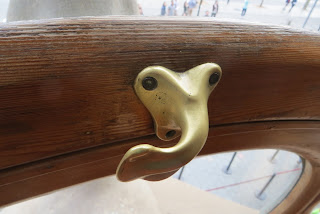 The shapes of the door handles, banisters and even the skylights were all ergonomically designed.  Gaudi shaped door handles by gripping pieces of clay and then having them cast in metal to fit comfortably in one's hand.

The building has a ground floor, a main floor with a terrace/courtyard, four upper floors, an attic and a roof terrace. The stairwell, which goes from the ground floor up to the roof, is a work of art in its own right and will be covered in the next post, along with the attic and roof.