I ended up spending another week in Barcelona on my own, and arranged to take an organized day trip/tour to visit the Dalì museum in Figueres and his home in Cadaques. First, our small group was driven by mini coach east along the Costa Brava to Figueres, where the Dalì Museum is located. Our tour guide, a lively young woman from Salou, kept us entertained with informative stories throughout the two hour ride from Barcelona.

The outside of the iconic building is topped by a series of giant eggs, and the walls are covered with small ceramic loaves of bread, a tribute to Dalì's wife Gala, as bread was her favorite food.

The heart of the museum is the building that once housed the town's theater when Dali was a child. It was also the site of one of his first public exhibitions. The old theater was burned during the Spanish Civil War and was in ruin for several decades. Then, in 1960 Dali and the town's mayor decided to rebuild the theater and use it as a museum dedicated to Dali's creations. A glass dome cupola crowns the stage of the old theater, and Dali is buried in a crypt beneath the stage floor.


Dali was inspired by an article in Scientific American about the minimum number of pixels needed to describe a unique human face. He used 121 pixels to complete Lincoln's face in the portrait below. On closer look, one sees the nude Gala in the middle of Lincoln's face. 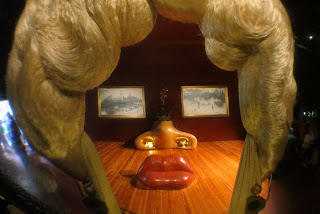 Another highlight of the museum is a 3D living room installation that when viewed from a certain spot, looks like the face of Mae West. Dali used paintings for the eyes, a fireplace for the nose and a sofa for the lips. The hair is draped over an arch atop a staircase, which allows one to view the illusion from a distance.

The museum continues through many levels and rooms, and visitors are urged to tour the space is no particular order, as the rooms have not been laid out in any systematic or chronological order, according to Dalì's wishes. The museum was a wonderful romp through the clever,  magical, often bizarre mind and talent of Dalì.

However, my very favorite part of the museum was in a separate building, which housed Dali's jewelry creations. I was unaware of this aspect of his art, and was impressed by the designs and craftsmanship of these items. 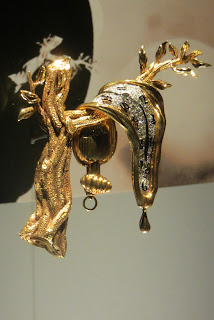 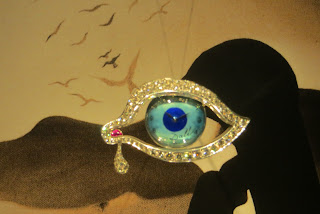 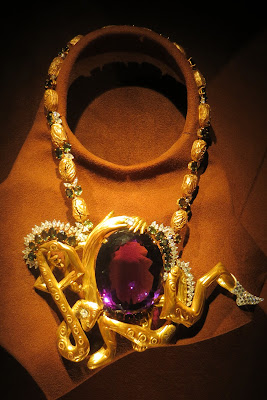 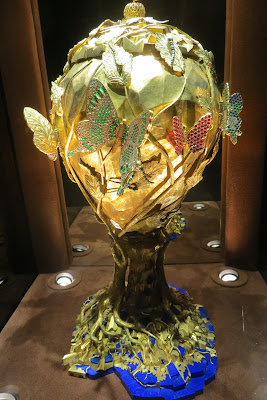 The trip to Figueres and the Dali Museum was well worth the effort and expense of the tour I'd arranged in Barcelona. The second part of the trip took us to Dali's home in Cadaques.