September 10, 2019
On my second day in Cadoneghe, we headed out to Cittadella, a nearby walled city where it is possible to walk atop the wall. This walled city was founded in the 13th century as a military outpost of nearby Padova. The wall has been restored and is 1461 meters long and has a circumference of 450 meters. There are four gates in the wall, that correspond to the four directions.
We dropped Ilde off at the high school in Cittadella where she teaches maths and then Gianluigi and I walked to the city center, where the the entrance to the wall is located. 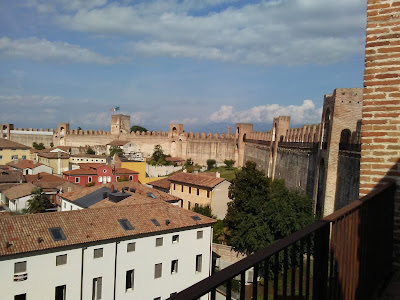 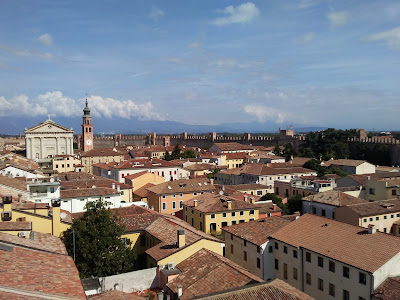 From there, we walked the entire length of the wall and rarely saw anyone else. Heading back to the city center, we stopped for an aperitivo, then met up with Ilde for lunch. 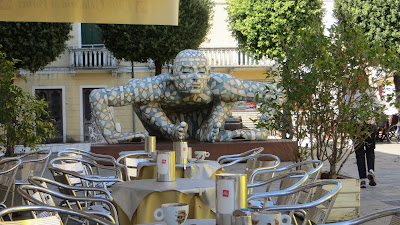 I was surprised to come across an outdoor sculpture near the restaurant that I had previously seen at an exhibition in Florence in 2010. Mind boggling to wonder how and why it made the journey from Florence to Cittadella? 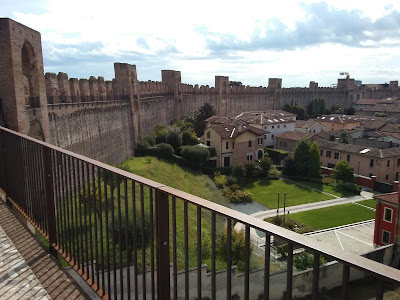 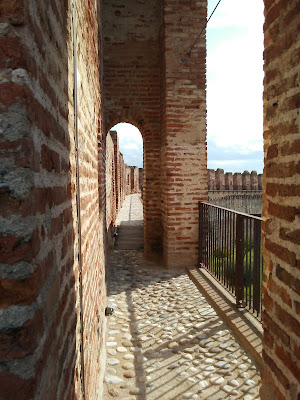 The last stop on our adventure was the town of Asolo, known for its scenic mountain views and famous artistic occupants, including the poet Robert Browning and the actress Eleonora Duse. 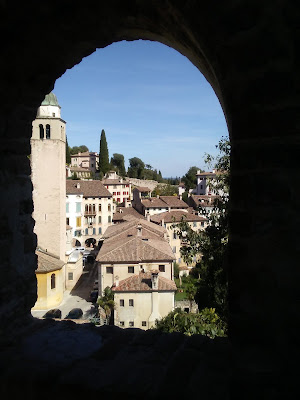 Oddly, the Asolo Theatre was purchased by the state of Florida in the U.S., disassembled, shipped to Sarasota, Florida, and reassembled in the Ringling Museum in 1952. It is now the home of the Asolo Repertory Theatre and the Asolo Conservatory for Actor Training in Sarasota. 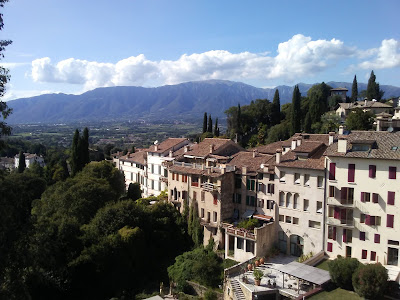 We spent a pleasant few hours walking the picturesque, mostly empty streets of the village, stopping for and aperitivo before heading back to Cadoneghe. 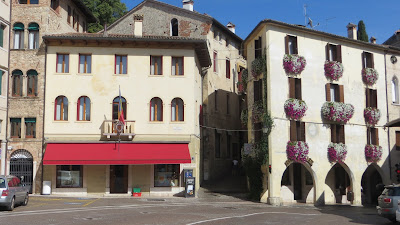 That evening's dinner included zucchini stuffed with scamorza (a smoked cheese) and prosciutto, along with minestrone, another great homemade meal. 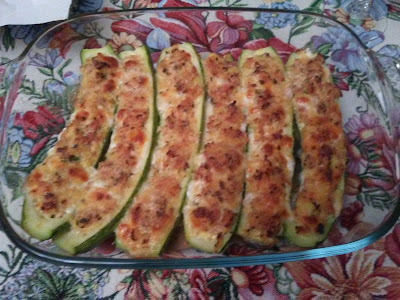 I'm deeply grateful to Gianluigi and Ilde for being such gracious hosts and tour guides. After visiting these out of the way villages in their company, I realized how difficult (if not impossible) it would have been to try and visit them on my own, as I usually travel by public transport. At the least, it would involve unreliable train or bus schedules. What's more, their familiarity with the towns we visited added rich insight and information I would have otherwise not been privy to. I'm truly fortunate to have such dear friends who are willing to share such adventures with. Grazie mille, cari amici!
Posted by marybeth at 12:05 PM