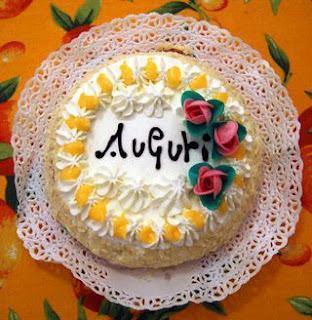 Today is Rome's birthday and Romans have a weekend of celebrations planned to celebrate the 2765th anniversary of the founding of Rome. (Hard to imagine!) Instead of candles, they will celebrate with plenty of fireworks!

Natale di Roma, or The Birth of Rome was established as a national holiday in 1924, and was celebrated on April 21. The date was chosen because, according to legend, Romulus founded the city of Rome on 21 April, 753 B.C. The philosopher Varro stated that April 21 was chosen as an auspicious occasion according to astrological calculations. This story was passed down through the writings of some philosophers of antiquity, including Varro.

Today also ends La Settimana della Cultura, the Week of Culture, when many museums have free admission. I went to Rome earlier this week to take advantage of the event, only to find out that the places I was most interested in seeing were not included on the list! (Baths of Caracalla, Palazzo Barberini's Galleria Nazionale d’Arte Antica, and the Galleria Borghese, which had a reduced fee, but was sold out until April 26.) The Colosseum and Roman Forum were also not free. I did manage to visit Galleria Spada, where I went to see several paintings by my favorite female painter, Artemesia Gentileschi. It seems the economic crisis has caused the city to limit the free admissions this year.

On Sunday, a parade with 48 historical groups participating will stroll through the streets of Rome in full Roman regalia, then be on display in the Circo Massimo area. I plan to be there!
Posted by marybeth at 1:23 AM