Autumn Adventure Agenda: It's a Trade-off

Many people say they envy my travels in Italy, or perhaps it's the freedom to be able to travel that they wish for. I wonder if they would feel the same if they understood how complicated it can be at times to travel on my own by public transport when it involves working online during my journey. For several years, I was able to housesit for several months, which made things much simpler. I had a place to leave my luggage while I visited friends, and reliable internet access. But this year, I don't have that option and had to figure out another way to manage working while I travel.

Case in point: I'm currently planning a two-month stay in Italy this fall. Seems simple enough. My main focus this trip is to spend a week in Ischia, a small island off the coast of Naples. A Roman friend went there last year and reported that it was very inexpensive during the month of September. Since it's near the ruins of Ercolano (Herculaneum) and Pompeii, I also want to spend a few days exploring those sites, where in 79 AD the two cities were buried by a catastrophic eruption of Mt. Vesuvius.

As it turns out, the low season in Ischia doesn't start until after the 10th of September, and I'll be there from Sept. 2-9, wouldn't you know? I'd had my eye on an inexpensive B&B, with a view of the sea, but waited too long to book it, and missed out. Instead, I'll be staying at a more costly hotel, which is much less inviting. But I'll have time to explore Ischia and Procida, a smaller island nearby. Ischia is relatively unknown to American travelers, but Italians and Germans often vacation there to enjoy the beaches and thermal spas.

The trick is that I will have to work online for nearly three weeks, starting the third week in September, so I need a place to stay in Italy with secure, reliable internet access during that time. Or I could take a 3-week trip to Italy, and come home in time to work. After looking at the cost of airfare, I decided to opt for the longer stay, to make it worth my while. I found a good deal on a spacious apartment in Florence in the San Niccolo quartiere, an area with many lovely parks, and booked it for a month. That left me with three weeks to travel and visit friends, but which ones, and where?

I've been invited to a wedding in Rome during the last week of August, which set my departure time. My friend Marco's son  is getting married to a Roman lass, and it will be a festive occasion to visit with his family again. I've visited Marco and his wife Marvi several times at their home in Modena, and they stayed with me in Zagarolo in 2011. I can also visit my Roman friends Lidia and Carlo. A few days in Rome seems sufficient, so from there I plan to go by train to Ercolano for the weekend, which will also serve as a base to visit Pompeii. I've booked an inexpensive B&B in Mt. Vesuvius National Park. It's too far from the train station to walk, so I'm hoping the owners can provide transportation. After Ercolano, I travel by train back to Naples, and then by ferry to Ischia. During that first week, I'll have some online work to complete, so made sure to book lodging with internet access, which is not always a given in Italy.

The main hassle is that I need to haul two computers (one for backup) with me on my travels, and clothes for several seasons, which means more luggage than is easy to manage when going by train, bus and ferry. I'm in my 60's now, and even though I'm in good shape, it's a hassle to haul around several suitcases, not to mention the worry of traveling with several computers. Sometimes I've been able to leave one of my bags with friends while I travel, but I'm not sure it's possible this time. I try my best to minimize as much as possible, but I'll still end up with one 26" suitcase, a 13"computer case, and a small backpack. At least the suitcases are on wheels, but that's no help when you have to haul them up and down long staircases at the train stations.

After Ischia, I've been invited to visit my friend Lucia in Trentino-Alto Adige. She's recently moved to a different village, and I'm eager to see her again, in the mountains of northern Italy. I've visited Lucia and her daughter Marta several times in the past, and am hoping they can visit me in Florence this year.

After Trento, I'll stop in Bologna for a few days to visit Massimo, Sofia and Erika. They visited me in Zagarolo last year and now it's my turn to visit them again. Parma will be the next stop, to visit friends Renata and Pietro. I stayed with them for a few days last year and they took me to the city of Lerici, on the Ligurian coast, while I was there. After Parma, I head to Firenze for a month.

Another option that's presented itself is the chance to visit Piran, Slovenia. My friend Gianluigi and his wife Hilda have offered me the use of their vacation apartment in Piran, if I would like to go there during my stay in Italy. And by a strange coincidence, another Italian friend just returned from Piran and told me how wonderful the town is! It's on the Adriatic coast, across the sea from Venice. I'd need to go to Padova to get the key from Gianluigi, then travel by train to Trieste, and by bus from Trieste to Piran. I'd like to go, but it will be a hassle with my luggage, and I'm not sure I'm up to it. We'll see.

Here's a map of the areas I'll be going to (the route to Piran is added for fun): 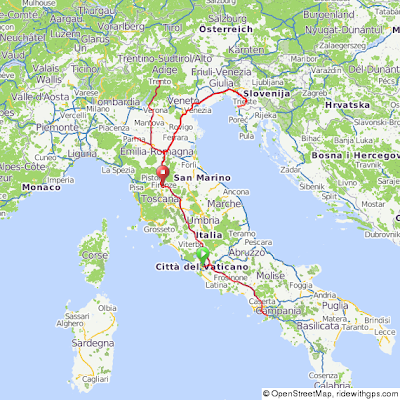 Before I leave home, I'll arrange my train travels and buy my tickets online. It saves so much hassle in Italy! In the past, I'd go to the train stations to buy tickets, which inevitably involves waiting in a long line. Online, I can get cheaper tickets, and can have them sent by SMS to my Italian cell phone. So much simpler!

Traveling around Italy can be exciting and rewarding, especially when visiting friends, but it's also wearisome at times. If I could travel with one small bag, and didn't have to worry about working or internet access, I'd be much freer to explore options like traveling to Piran. So for those who might envy me, just keep in mind that there's always a trade-off. If I don't work, I can't afford to travel, so I'm thankful for the online jobs. And working online gives me the freedom to travel for months at a time. Overall, it's been worth it to deal with the hassles so I can enjoy the many rewards of traveling in Italy.

I can't imagine how you managed to work while traveling. And more, thinking about how tedious it is to travel on such a place like Rome. I mean, travelling from one spot to another, you really need to line up when buying for a ticket, wait for the train/bus, looking for an apartment with great internet connection and for a good place to stay while being there in Rome.

Good thing that you are very smart in finding ways how to shoot two birds at a time--- enjoying your travel to Rome and stay for a month there at the same time had your work done as well. Complements to that. Well, there’s more than other people could envy about you. I mean, it’s more than the fact that you had visited to Rome. It’s your determination, will and wit that they should envy about.

In my own opinion, I don’t call it a trade-off but instead a product of willpower, disciplineand enthusiasm. Anyway, great post over here...