I'm heading out soon for Rome, and I'm not sure when I'll have time to post again, so will share some of my upcoming activities while I have a minute.

I fly out of Kansas City Sunday afternoon, with one stopover in Detroit. I will arrive in Rome at 10:30 on Monday morning. My friend Lidia has offered to meet me at Fiumicino airport and I hope to spend the afternoon celebrating her birthday, albeit a week late. I stayed with Lidia and her husband Carlo last year, and they were very generous hosts.

Lidia, me and Carlo, 2009
This time I'll be staying downtown at a B&B, as I want to be in the center of things, where I can walk around Rome as I like. Lidia and Carlo live in the suburban EUR district, an area renowned for its modern, Mussolini - inspired architecture, but its about 30 minutes by car, bus or metro from the city center. I'm eager to get up early on Tuesday and walk around Rome before the streets get too crowded. I'm most interested in going to Gianicolo park, where it is said the painter Rafael met Margherita, his lover and the subject of many of his paintings, including La Fornarina.

On Tuesday, I've arranged to meet with Deborah, who lives in nearby Zagarolo. She's British, but has lived in Italy for 25 years. I connected with Deborah last year through an online housesitting site. Deborah has a sweet little house in the countryside outside Zagarolo, and needs a housesitter for months at a time to care for her cats while she travels. I had considered housesitting for her this year, but decided I preferred to be in the center of things in Florence instead of being alone in a house in the country. But Deborah and I have struck up a friendship, and I'm sure I'll housesit for her before long. She offered to meet me in Rome for lunch, and I'm looking forward to it. 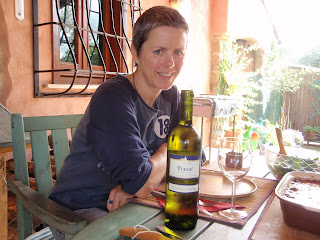 One of the great things about her house is that it's across the road from a vineyard that makes a famous local wine, Tufaio, and if I were to be there in the fall, I could help with the wine harvest. Zagarolo is also famous for its hazelnut trees, and the locals join in for that harvest season as well. Maybe next year!

On Wednesday, I will take the train to Florence to claim my apartment and get settled. I'll have final essays to grade next week for an online class I teach, so I'll be eager to get that out of the way. (I'm an adjunct prof for an online university). Fortunately, it's a job I can do on my computer, and I hope to do some of it on the long flight to Rome.
On Thursday, I'll go to my first meeting of FLOW, the Florence Writers group that another friend, Melinda, has invited me to be part of during my stay. I met Melinda several years ago through her blog, where she writes about her life in Florence. 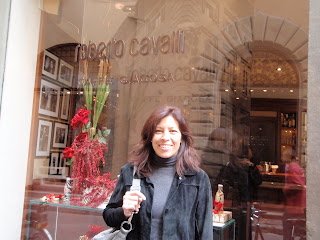 Melinda, Florence, 2008
We met in person two years ago and have maintained a correspondence. Recently, she helped me out when I was looking for lodging in Florence, and we ended up talking about writing, which led to her invitation. In addition to her blog, Melinda writes for the Florentine, an English-language newspaper published in Florence, and is working on a book. I've been inspired by her column about expats and the reasons they choose to live in Florence.

After the FLOW meeting, I'll be meeting my friend Domenico on Skype, as we have done most Thursdays for the past 3 years. Domenico lives in Grottammare, in Le Marche, along the Adriatic coast, and I've had several wonderful visits to his town and family over the past few years. He's one of the language exchange partners that I meet with every week, for an hour at a time, to develop our language skills. I've met many of my Italian friends through a language exchange website, and you'll be hearing more about them as time goes on. Because of this, I usually manage to meet and speak with my Italian friends for 2-6 hours a week, which has helped me considerably in my study of Italian. I'll have the chance to see many of them while I'm in Italy.

Domenico with his mom and sister, 2008

One of the families I'll miss seeing in Italy this year are the Ruggeris, of Rieti. I've visited them twice and have immensely enjoyed their friendship. I initially met them when they lived in Kansas City for two years where Andrea was transferred for his job at a pharmaceutical company. Monica, Andrea and their three children, Virginia, Camilla, and Tommaso, gave me a special tour of their region (Lazio and nearby Umbria) last year. They recently moved to Paris when Andrea was promoted in his company, and I've been invited to visit them there, too. If I can manage to go to Paris while I'm in Italy, I'll do it! Perché non? (Why not?) 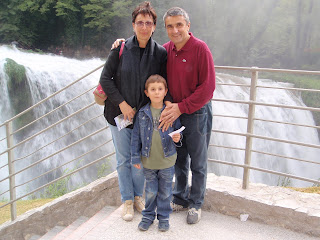 Monica, Andrea and Tommaso Ruggeri, Cascata delle Marmore, 2009
That's a glimpse of what I'll be up to next week. But now I need to pack my bags!
Posted by marybeth at 5:19 PM