While visiting Massimo and Sofia in Bologna, they took me to visit several other towns in the region of Emilia-Romagna. The first one we visited was Medicina, where Massimo's mother lives, to attend a unique festival that honors the legend of Il Barbarossa.

The origins of the name of the town of Medicina (in Italian it means "medicine") are uncertain and many hypotheses have been made about it. One legend says that the Emperor Frederick I (called Barbarossa due to his red beard), was passing through Medicina from Milan when he fell ill and then miraculously recovered because of a snake that accidentally came into the pot of his soup. However, it has been proven that the town was named long before the real-life passage of Barbarossa. The "Festa del Barbarossa" takes place in the 3rd weekend of September every year, in memory of the legend.

We saw a procession of people dressed in medieval garments passing through the streets of Medicina, celebrating and saluting the Emperor Barbarossa.

In 1992 the Palio della Serpe was added to the festival, which is basically a race. The five quartieres are represented by pairs of young men,  who attempt to show their illustrious guest  their "prowess" by competing in a race to offer gifts to the warrior king, who is always hungry. We watched as these duos carried eggs, bread, and wine on pallets along a torch-lit street in the center of town. The gifts were simple, representing a rural community and medieval products of the land.

The prize? A banner, designed every year by a local artist and embellished with embroidery. We never learned who won the race, but it was fun watching the event!

Next, we visited Ferrara, known as a UNESCO World Heritage Site for its beauty and cultural importance. We made a quick trip there on Sunday morning, before I caught the train to Parma.

The city is surrounded by more than 9 kilometres (6 miles) of ancient walls, mainly built in the 15th and 16th centuries.Together with those of Lucca, they are the best preserved Renaissance walls in Italy.

The most iconic building of the town is the imposing Castello Estense, situated in the very centre of the town. It was built starting in 1385 and partly restored in 1554. 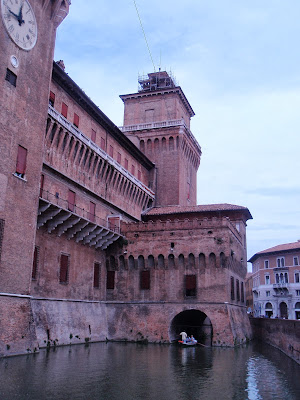 Imposing towers stand out at the four corners of the castle, symbols of the magnificence of the Este Family, who ruled the area and lived in the castle.

We took a tour of the Castle, which was very interesting. It included many frescoed rooms, a chapel, and even dungeons! If you look closely at the photo, you'll notice many pieces of tape on the ceiling. Several earthquakes shook the Emilia-Romagna region in May of 2012, causing widespread damage to many buildings, including the castle. The tape is placed to bind the areas that were affected by the tremors.

Walking through the town, we saw the cathedral, though we didn't have time to go inside.

Another event that was going on that weekend was The Ferrara Balloons Festival. It's the most important festival of balloons in Italy and one of the most prestigious in Europe. The week-long festival was winding down the day we were there, and I only read about it later. My brother is a balloonist in the U.S., and competes in many balloon festivals, so I was interested to hear about this event. It seems that the third weekend in September is filled with many entertaining festivals in Emilia-Romagna: a good reason to return for another visit!

Many thanks to Massimo and Sofia for introducing me to Medicina and Ferrara! Siete molto gentili e avevo un bel tempo!