Well, I just had too much fun tonight. I had heard about an annual event, la Festa della Rificolona, that occurs every September 7 in Firenze, so I decided to check it out. What was once a religious procession from Piazza Santa Croce to Santissima Annunziata is now a lively parade of families with children carrying many colorful lanterns around the centro storico (historical center) of Firenze.

In the past, the event was to celebrate the birth of Mary on the eve of September 8: people came to Florence from neighboring towns, carrying lanterns to light their way in the night.

I joined the group, led by a band playing American Jazz (they started off with "When the Saints Go Marching In"), going from Santa Croce to Piazza della Signoria. We boogied our way across town for the next hour. 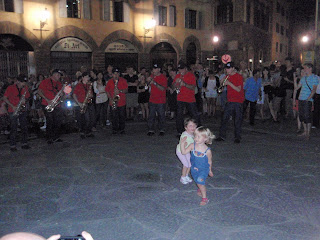 Sound Street Band in Piazza Santa Croce, with due bambine (two little girls) getting into the spirit. 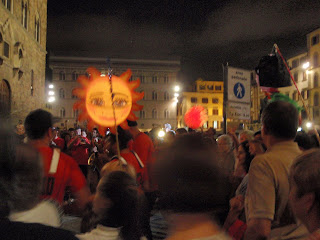 Piazza della Signoria, , where more people joined us, along with the Florentine gonfalone (a banner with a red fleur de lis), carried by men in red tights. Note the paper lanterns carried on poles. 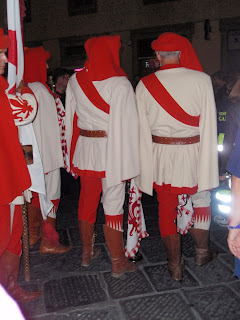 When we arrived at Piazza Duomo, even more people and another band joined the group. 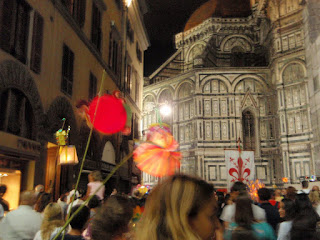 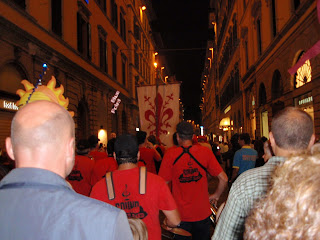 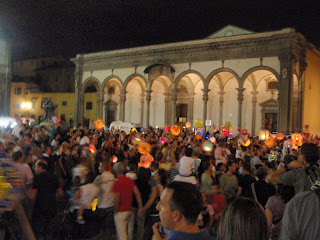 
At Santissima Annunziata, the piazza was already filled with people, who were being entertained by yet another band. By this time it was after 10pm, but the crowd was still going strong. I felt privileged to have been part of the procession: a very unique Florentine experience for my first week here. And tomorrow night, there will be a parade of lanterns on il fiume Arno (the Arno river) which will start from the Arno Rowing Club, near the Ponte Vecchio. I hope to see that, too!

For more photos and some rockin' videos, click here:
FestaDellaRificolona

These occasions are so much a part of what living in Italy is all about.

You bet! I love it when I just happen upon them...it's a magical experience.