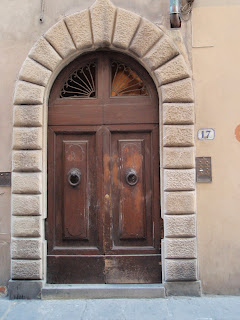 Front door of my apartment building in Firenze

Starting a new life takes a period of adjustment. I felt disoriented for the first two days, which was compounded by some problems with the apartment I'd rented. The main one: no hot water. Also, the wifi connection was inconsistent. Other problems of less importance: the tv didn't work, there were no blankets for the bed, some of the light fixtures didn't work, etc. But once I emailed the agency, they sent over two young men, Mattias and Nic, to help resolve the problems.

For the next few days Mattias came and went, and while he worked, we had some great chats. Nic brought his dog along when he came to figure out the computer connection, and brought grapes to share with me. Both men were very laid back, attentive, apologetic, eager to keep me in the apartment by making sure everything is working properly.

No hot water! After both men fiddled with the caldaia (hot water heater), they decided they would need to have a tecnico (technician) look at it. But that won't happen until next week. In the meantime, they've given me the keys to an empty apartment two floors down, so I have access to a shower (and a bathtub!).

In other respects, my apartment is absolutely marvelous! It's quiet, private, with a view and lots of sun coming in through large windows. Tile floors throughout, and vintage furniture that suits me. The bed is queen size, though it lacks good support for my back. The bathroom is basic, but sufficient. I've enjoyed making the place more homey...buying petunia and basil plants for the terrace, and a few things for the kitchen. I can hear other tenants now and then, and it seems that they are mostly Italians, but I've not yet seen any of them in the building.

About the FLOW meeting (Florence Writers) that I was eager to attend...I was unable to find the cafe it was being held at, even though I walked right by it THREE times! There was no sign, I did not see a number for the address on the building, and I finally gave up and called it a loss. I met the group leader, Melinda, the next day for un caffé, and she recapped the meeting for me.

Oh, the other night Leonard Cohen gave a concert down the street from me, in the Piazza Santa Croce, part of his World Tour. I saw the stage being dismantled and asked what it was for. It's only a few minutes walk from my apartment....if I'd known about it, I'd surely have walked by. Al Pacino was in the audience, I hear.

I wonder what else is happening here.....guess I need to find out!
Posted by marybeth at 2:09 AM

Glad you have arrived safely and are doing well, Marybeth! We will follow your adventures.
Chris and Kim