Backtracking to my arrival in Italy, I was met at the exit of the airport in Rome by Lidia and Carlo. Fiumicino airport was a zoo that day, as it was the last day of the Italian holiday season and Italians were coming home from all over the world. I was glad to get out of there! The Spighis whisked me away and dropped me off downtown at my B&B, though we made plans to meet the next day for dinner. Perfect! I was very pleased with Little Italy, a B& B situated near the Termini train station, within walking distance of many Roman sites and access to the subway.

Run by Rene, an attentive Dutch man who's been living in Rome for 20 years, I was very pleased with the comfy room I was given. I settled in and then walked to familiar tourist sites: the Trevi fountain, Piazza Navona, the Spanish steps, etc. For dinner, I tried a trattoria near the B&B that Rene had recommended. I was eager to try bucatini all'amatriciana, a Roman dish that is best served in Rome. The waiter neglected me in favor of tables with more people, and I started getting peeved. After an hour, I received the antipasto, bruschetta ai carciofi (grilled bread with artichoke topping) and a glass of wine. Still no pasta.

Two Italian couples sitting nearby, who arrived after I did, asked if I'd already eaten. When I told them I'd been waiting for an hour, they were not happy, knowing their food would be coming after mine. We waited nearly another hour, then the two couples simply got up and left. I followed them, leaving enough money to cover the bruschetta and wine. Uffa! By this time, it was nearing midnight, and I was no longer hungry for pasta anyway. When I told Rene about it the next day, he was appalled. Not a typical experience, I was happy to know. Perhaps the kitchen staff had not yet returned from holiday?

The next day, I got up early to explore Gianicolo, a park I'd been wanting to see since last year. I needn't have bothered. I took the Metro (subway) to the Vatican, walked by the long lines of tourists waiting to get in to St. Peter's (already seen it), and over to the park, which was a big disappointment. Great view of Rome, but it was dirty, crowded with cars, and there was no real sense of open space like Pincio, a lovely park on the other side of Rome. In addition, I had underestimated how long it would take me to walk back to Termini, where I'd made arrangements to meet my friend Deborah for lunch at noon. I'd hoped to have time to meander through Trastevere, my favorite area of Rome, but instead I rushed to take a bus over to Termini. I arrived just in time for our meeting. 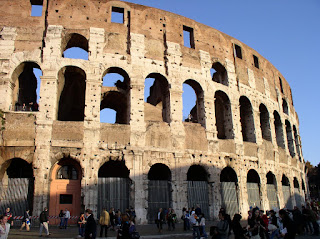 Colosseo
We walked back the way I'd just come, past the Colosseo and Foro Romano, working our way towards the "ghetto," stopping to visit some interesting churches along the way. Deborah led the way to a great sidewalk cafe, where I had the pasta I'd missed out on the night before, along with alici fritte (fried anchovies), an antipasto that Deborah recommended. Quite tasty and not what I expected at all. The only anchovies I've known about have an intense flavor, because they've been cured and canned (they also have a different name: acciughe). Fresh anchovies don't have the fishy taste or smell, and are quite delicious. Deborah and I had a good visit, and I enjoyed hearing about her recent travels to Sweden and Finland, to see the midnight sun. We have similar travel aspirations, but different destinations. On the way back to Termini, we passed Torre Argentina, the famous Roman cat sanctuary, near some ancient ruins. Deborah is an avid cat lover and it was interesting to see this unique home to many abandoned cats.

We parted at 5 pm, and I returned to the B&B to grade final essays for my online class, finishing just in time to meet with Carlo and Lidia at 8:30 for dinner. (Typical dinner time in Italy). They picked me up and drove me to a small restaurant nearby. I was not hungry for pasta after my lunch with Deborah, so I ordered prosciutto with melon and grilled vegetables, while they both had pasta dishes. Lidia ordered a special dessert invented by the chef, a kind of chocolate brulee, over a syrup made from clementines. Squisito! (Yummissimo!) It was too rich to eat much of it, and in Italy, you NEVER ask to take home what you don't eat, so I left half of it there, uneaten. Ah well, there's always more opportunities to eat chocolate in Italy! 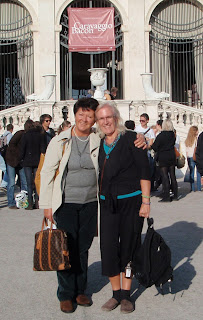 Lidia and I at Villa Borghese, 2009
I got back to the B&B about 10:30 and was ready to crash. I got up early the next day to buy my ticket early at the train station, then walked back a few hours later, my two heavy bags in tow (grazie a dio for wheeled luggage!) I rode the Eurostar, a fast train that takes only 1 and 1/2 hours to arrive in Florence. Very comfortable ride....across from me was a woman traveling with a cat, and it sat in its container on the table between us. Another Roman cat, it seems....

When I arrived in Florence, I called the agency that I rented the apartment from, and they agreed to meet me at the apartment in 15 minutes. The streets were thick with tourists, but I made my way, hauling my bags behind me along the cobbled streets, and arrived just as Mattias, a young man from the agency showed up to check me in. Unbeknownst to either of us, we'd be seeing a lot of each other in the next few days.
Posted by marybeth at 8:42 AM