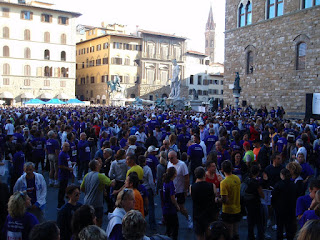 The crowd in Piazza della Signoria before the race

Un fiume viola...the headline in today's giornale (newspaper) describing yesterday's Corri la Vita. By all counts, it was an extraordinary event, and for me, even more so. I was happy to be included in the crowd of more than 20,500 people, mostly fiorentini (Florentines), united in an effort to raise money for the fight against breast cancer. More than 270,000 euros ($363,555) were raised. (Note: Each year, a different color of t-shirt is chosen for the event, and this year's color, purple, also the color of Florence's beloved soccer team, La Fiorentina, was especially popular.) 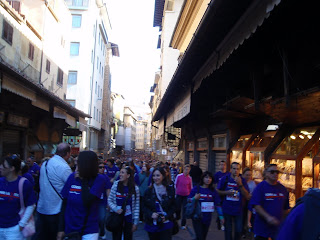 I was at the front of the walking group, and walked fast, so was able to finish the 5 km course (3.5 miles) in an hour, ahead of most others. I even had time to stop and view a few churches and palazzi along the route. Most people took a more leisurely pace, walking with friends and family, talking all the way. People of all ages participated, from infants in strollers to octogenarians. I was impressed to see so many children and teenagers running: overall, this was a very fit group of people! 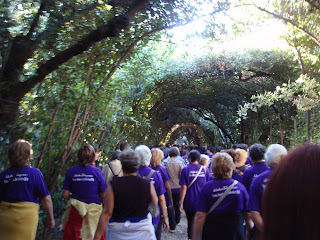 Walking through the Boboli Gardens 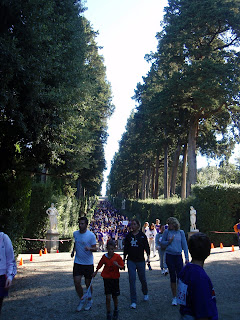 It was one of those times where I realized how many things I would miss out on in life if I waited to have someone to do them with. In this particular case, I would have enjoyed it more if I'd had someone to share the experience with, but I'm glad I wasn't afraid to do it on my own. 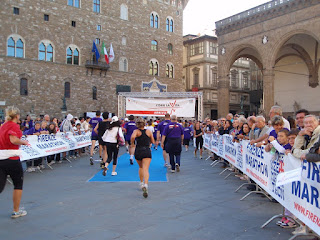 Arriving at the finish line in Piazza della Signoria

I was very impressed with the exuberant participation of the fiorentini in this event. I've never experienced anything like it at home, except when people fill the streets after winning a basketball championship. But in that case, people aren't participating in the challenge, they are celebrating the victory. This event demonstrated wholehearted commitment and effort by the entire community, and it was exhilarating to be included in that number of purple-shirted participants.

After that, I decided to head to Fiesole, a small town in the hills above Firenze. On the way, I stopped in at the Museum of San Marco (free this weekend), where I was able to see frescoes painted by Fra Angelico in the 1400's. Here's a link to the museum site, with photos of what I saw:

They were easily visible on the walls of the monk's cells, as San Marco was once used as a Dominican convent. There were many paintings by Fra Bartolomeo and Ghirlandaio as well. Incredibile! There is also a room that showcases illuminated manuscripts and how they were created by the monks.

Then I took a 10 - minute ride on the No. 7 bus to Fiesole. Fiesole is usually a quiet town, but yesterday many tourists were there, so I didn't stay long. But before leaving, I was able to capture this view of Firenze. Then I headed home for a long nap, well-deserved after a tiring, but exhilarating day. 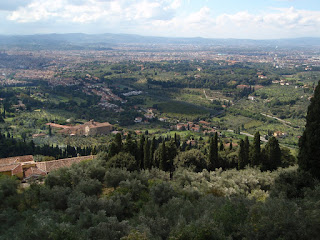 Interesting especially as I had no idea the Italians use purple as a colour for Breast Cancer Awareness. In the UK it is pink and I had thought this was general until reading your post.
http://en.wikipedia.org/wiki/Pink_ribbon

LindyLou,
t's not for that reason that we wore purple. Pink is the official color worldwide for breast cancer awareness. However, every year, a different color shirt is chosen for Corri la Vita. Since purple is also the color of Florence's soccer team, La Fiorentina, aka Viola, this year's color choice was especially popular.