On Sunday, I caught an early train to Bologna, to spend the day with Massimo, Sofia, their daughter Erika and Milly, their energetic puppy. I met Massimo earlier this year through the language exchange site, but this was our first chance to meet in person. He's been a great help in teaching me the "Italian" way of saying things.

Massimo knew that I was interested in the 4 km sentiero (path) that starts in the city center and climbs a hill up to Il Santuario della Madonna di San Luca (The Sanctuary of the Madonna of Saint Luke.) The path is often used as a pilgrimage route, and the panoramic view from San Luca is magnificent. Bologna is a town of many porticos, and the page to San Luca is composed of 666 porticos. We had used the story of San Luca as one of our language exchange exercises. 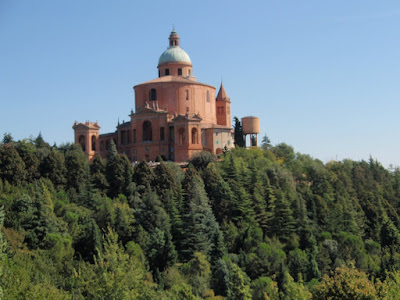 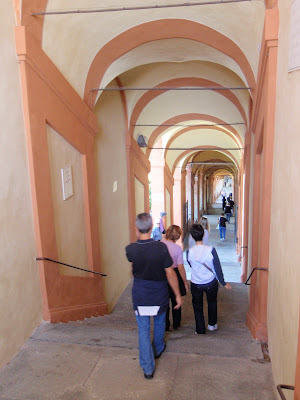 Walking down through the many porticos.

Massimo shared this story with me:

"This Madonna is linked to a famous event: in 1433 the spring was extremely rainy and threatened to cause a severe famine. The icon of the Madonna was taken to the city to plead for an end to the rains, and as soon as the icon entered the city, the rains ceased. There was a great festival of thanksgiving, which included carrying the picture of the Madonna around the city for three days, then taking it back to the Sanctuary. From that day, each year the icon comes down for three days to Bologna: this custom represents a great religious time for the city. The interesting thing is that each year during this time, it invariably rains!" 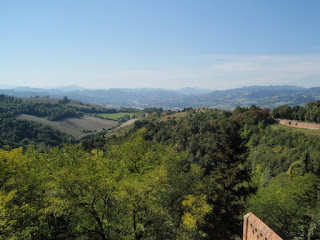 The view from San Luca

After our climb, and descent back to the city, we returned to their home for pranzo (lunch). I had once mentioned to Massimo that one of the most delicious meals I've ever eaten was in Bologna several years ago, when I had Tortelloni di zucca (Tortelloni stuffed with pumpkin). In honor of my visit, Sofia had prepared Tortelli di zucca! Nuts are often used in the stuffing, and Sofia had used some biscotti made with almonds, which added an exquisite flavor to the tortelli.

Sofia had prepared an elaborate feast and had set the table with great care. First we ate verdure fritte (deep-fried vegetables), tortelli di zucca, tacchino ripieno con spinaci (turkey stuffed with spinach), and pomodori con pangrattato (tomatoes with bread crumbs). The crowning touch to the meal: an elaborate torta (cake) made with layers of chocolate and vanilla cream filling, topped with tiny cigne (swans) that Sofia had created. (She worked for some years in a pasticceria (pastry shop) and still enjoys being creative with dolci (desserts). I know she spent many hours preparing these dishes, including a search for the right type of pumpkin for the tortelli di zucca, and I felt honored that she went to such trouble. 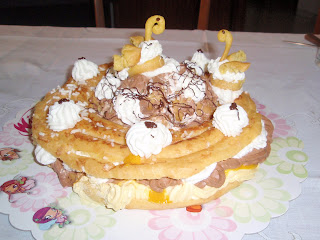 Does anyone still wonder why I love Italians? I always feel humbled by the thoughtfulness, openness and generosity that they bestow on me during my visits.

After our feast, another passeggiata (stroll) was called for. This time we walked from their flat to the city center and climbed la Torre Asinelli, a leaning tower that is higher than the tower of Pisa or the campaniles in both Venice and Florence. We climbed 498 wooden steps to the top, where we had an incredible view in every direction of many Italian provinces. Sometimes it is even possible to see the Alps in the distance, but not that day. 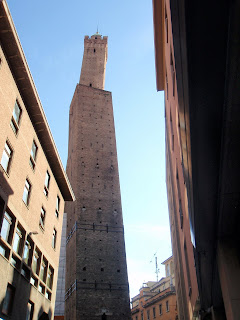 There are two famous towers in Bologna. We climbed the taller one (the Asinelli Tower, 97 m, which is shown leaning behind the the Garisenda Tower, 48 m). 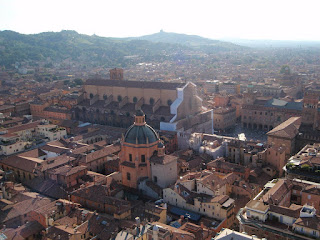 A view from the tower, with San Luca in the center of the far background, on the hill.

Another place we visited was the Sette Chiese (seven churches) of Piazza Santo Stefano, an interesting complex of ancient churches that interconnect with each other. By this time, Erika was eager for gelato, so we walked to their favorite gelateria, where only the freshest ingredients are used daily (80% fresh fruit). I tried fico (fig)....meravigliosa! (wonderful)

It was nearing the time for my departure, so we headed to the train station, where they waited with me for 30 minutes until my train arrived. I had a wonderful time in Bologna, grazie a Massimo and his family, and I hope they can visit me in Firenze so I can play tour guide for them in return. Sadly, I won't be able to create a feast that will compare with the one Sofia made for us today. 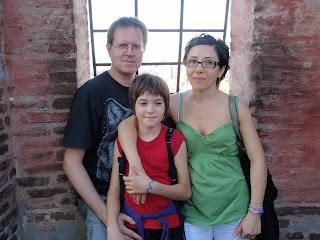 Bravissima, Sofia per la meravigliosa cena! Grazie a Massimo e tutti per la vostra gentilezza!
Posted by marybeth at 9:06 AM

Email ThisBlogThis!Share to TwitterShare to FacebookShare to Pinterest
Labels: Bologna

Ciao Marybeth,
we feel honoured to be mentioned in your blog !
A presto
Massimo Sofia and Erika