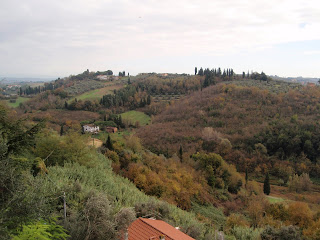 The view from San Miniato


Last Saturday I took a short train ride to San Miniato, a small town west of Florence, near Pisa. On the last three weekends in November, San Miniato hosts their annual Tartuffo Bianco (White Truffle) Festival, and people come from all over Europe to buy these parasite-like funghi, considered the pinnacle of gourmet eating. It is only in Northern Italy and Umbria that white truffles are found, and I decided to see what all the fuss was about. The area around San Miniato produces 25% of Italy's annual white truffle crop.

Once I arrived in San Miniato, I had to take a bus from the train station to the town at the top of a hill, a 15-minute ride. I arrived in the town itself by 10:30 a.m., but not much was going on and few people were in the streets. Quite a contrast to the sagra in Marradi of a few weeks ago. The town itself, described as "picturesque," was not impressive, except for the views of the countryside. 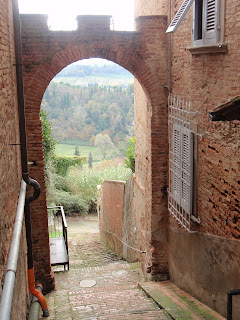 Another reason I was interested in San Minitao is because of its desgination as a Slow City, described by Wikipedia as:

"Cittaslow (literally Slow City) is a movement founded in Italy in October of 1999. The inspiration of Cittaslow was the Slow Food organization. Cittaslow's goals include improving the quality of life in towns while resisting "the fast-lane, homogenized world so often seen in other cities throughout the world" – as the official slowmovement.com description puts it. Celebrating and supporting diversity of culture and the specialties of a town and its hinterland are core Cittaslow values." 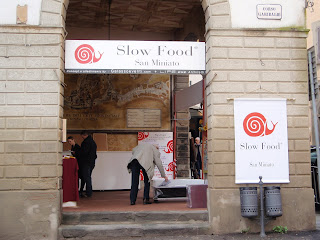 "Slow Food is an international movement founded by Carlo Petrini in 1986. Promoted as an alternative to fast food, it strives to preserve traditional and regional cuisine and encourages farming of plants, seeds and livestock characteristic of the local ecosystem. It was the first established part of the broader Slow movement. The movement has since expanded globally to over 100,000 members in 132 countries. Its goals of sustainable foods and promotion of local small businesses are paralleled by a political agenda directed against globalization of agricultural products." 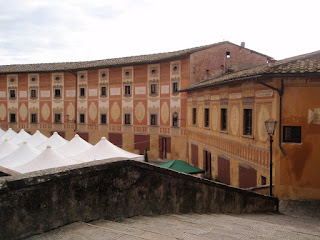 A view of San Miniato with vendor tents filling the piazza.

From SlowFood to White Truffles provided quite a contrast! More similar to the Eurochocolate festival than the Marradi Sagra, there was a line of booths selling expensive food items; mostly meats, cheeses and chocolate. There was also one tent where vendors sold truffles and truffle products at one end, and wine at the other end. I'm not a big fan of truffles, but bought a small jar of Crema di Carciofi e Tartuffi Bianchi (an Artichoke and White Truffle spread), for 5 euros. There was also a tent where one could eat truffle dishes, but at 20 euros an item, I passed on the opportunity. 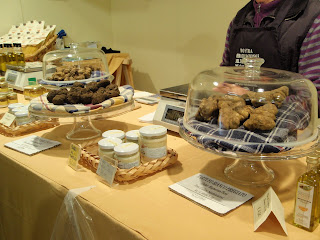 By noon, the town was starting to fill with people. Unlike the Marradi sagra, it seemed that the majority of participants were non-Italians: many Germans and Brits, even French people were in abundance. Most people came in cars and were well-dressed. This was more of a "posh" affair, frequented by people who could afford to buy the expensive products on sale. (FYI: White truffles are selling this year for $160 per gram (or $72,575 per pound), down from last year's high price of $180 per gram.) Definitely not my style. But I'm glad I had the chance to check it out. Now I know that I prefer sagras to fancy festivals like this one. Funny thing....when I arrived back in Florence, there was a "fancy food" fair going on in Piazza della Repubblica, with many of the same food products I'd seen in San Miniato, including truffles!

Ahhh...I see...you are still in Italy! Beautiful photos. I bet you are fully Italian by now. : ) Have a wonderful "Thanksgiving" this week, Marybeth, if you will still be in Italy on Thursday. We will think of you.
Kim and Chris