David, the Force of Beauty 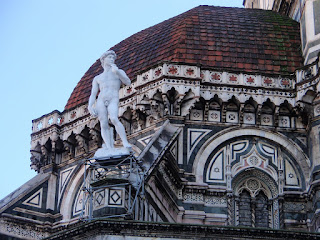 «David, la Forza della Bellezza»
One of the events going on this week is Florens 2010, with many exhibits going on around the city. One of the most interesting is the «David, the Force of Beauty», which has a replica of Michelangelo's famous sculpture, made from the same Carraran marble as the original statue, being placed in four different spots on succeeding days, to highlight the controversy over the years about where the statue should be placed.

The goal is to make visible what Leonardo da Vinci, Sandro Botticelli, and Giuliano da Sangallo had envisioned with the location of the work in different places.

I'll write more about it after Il David has made his rounds of the city, but in the meantime, you can watch a video of how the statue landed on the Duomo, or view photos of that process. The video is in Italian, but it gives you an idea of the streets that I walk each day, as well as the immensity of the Duomo and the wonder of tourists as they view it. (Just watching the first few minutes will be sufficient.)

video of David on the Duomo

photos of David on the Duomo