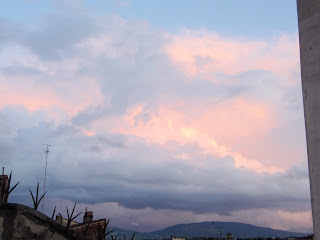 One of the many perks of my apartment is that I have a great view of the sky, and today I watched the clouds roll by throughout the afternoon while I was working. Great heaps of clouds marched across the sky, as if they were in a hurry to pass over the city as quickly as possible, eager to reach the sea. Every so often, a patch of blue would appear, but within a short time the sky would be dark again with ominous-looking clouds. At times, there were rumbles of thunder, and it even hailed tiny bits of ice all over the terrazza for a while. 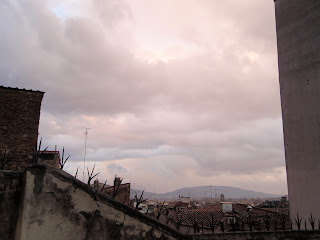 I was mesmerized by the cloud formations, the different levels of them, and the many colors that were visible. While I was talking to my friend Marco in Modena on Skype, I was trying to describe my view of the sky out my window. He said "diciamo il cielo Michelangelesco" (we call that a sky by Michelangelo). Perfetto! Che bellissimo! Sometimes il maltempo (lousy weather) creates beautiful visions that makes it all worthwhile. 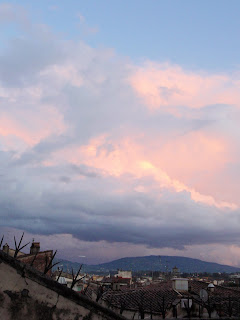 Our weather was very similar to yours yesterday, without the ice. I love your friends description of the sky. Our sunset had a hint of pink last night, but I left it a little late to think about taking a photo. Thank goodness today has been considerably calmer.

I absolutely LOVE this! This is the same view from my apartment. I am just over that wall with the spikes on the top.

Thank you for posting such beautiful photos of the Michelangelo Sky! (I love that!!)