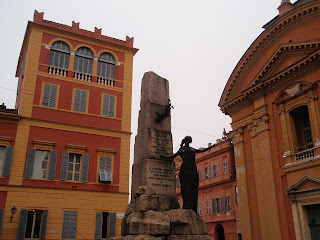 Earlier this week, I took the train to Modena to visit my friends Marco and Marvi. I met Marco through a language exchange website, and I had dinner with them last year when I was in Parma, about 30 minutes from Modena. This year they invited me to stay in their home for a few days so they could show me around their city. I had been to Modena in 2008 for a day trip, but really didn't know much about the city, except that it's famous for its balsamic vinegar and it is the birthplace of Pavarotti.

Marco is a busy man, even in retirement, so I felt fortunate that he was able to carve out a few days of his schedule to give me a tour of Modena and the nearby towns of Nonantola, Vignola, and Borgo Serravale. He picked me up at the train station and when I arrived at their home, Marvi had prepared colazione (breakfast), with homemade marmalade-filled pastries and cafè. 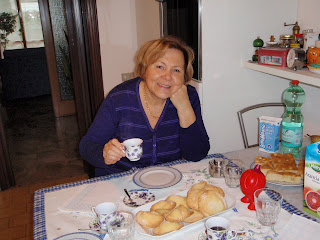 
While Marvi stayed home to fix lunch, Marco took me on a tour of downtown Modena. One thing I love about Modena is the colors of the buildings: various shades of ochre. After walking around the town center, we visited the Duomo. It was a rainy day and dark inside the Duomo, so I didn't take any photos: instead, these are from my visit there in 2oo8. 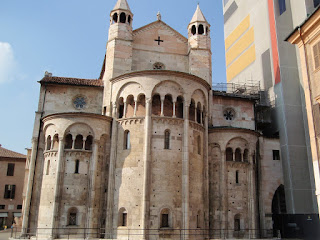 A photo showing the apses of the Duomo 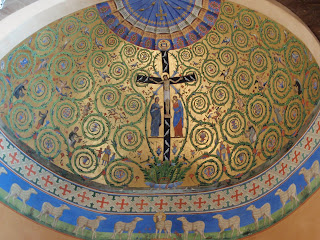 Mosaics inside the Duomo 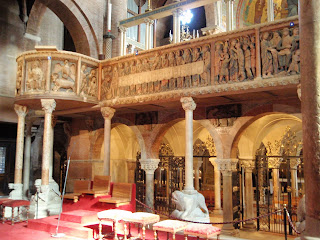 An extraordinary pulpit, carved out of marble

For lunch, Marvi prepared a wonderful feast that include lasagna, cotoletta (meat cutlet) and zuppa inglese, a dessert made with chocolate and vanilla pudding, and a layer of red flavored with the liqueur Alchemes. (I read on Wikipedia that this dessert first appeared in Italy during the 16th century as an effort to recreate English Trifle.) For an antipasto, we had slivers of parmagiano-reggiano cheese dipped in the family's 30 year-old aceto balsamico (balsamic vinegar), a truly delicious combination. We drank Lambrusco, the local sparkling wine, and Nocino, a liqueur Marvi's aunt makes from walnuts. 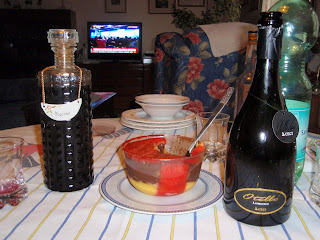 When I have eaten in the homes of my Italian friends, I forget that that pasta is only one of many courses. Marvi's lasagna was delicious (made with bechamel sauce rather than a tomato sauce), prompting me to eat too much of it, and by the time the meal was over, I felt uncomfortably full for the rest of the day.

That evening we drove to Nonantola, a nearby town. The main sight in Nonantola is the Abbey of San Silvestro, a Romanesque basilica from the eighth century that was part of a Benedictine monastery. It was unusual in that it was very large, but also very empty of decorations and statues. Back in Modena, they took me to one of their favorite trattorias, one that features typical Modenese food. I'm afraid I wasn't able to enjoy it much, as I was still full from lunch. I hope I'll have another chance in the future!

The next day Marco drove me into the hills south of Modena to Vignola where we were able to visit a well-maintained castle called Rocca di Vignola. As we arrived in Vignola, the sun came out and we had a lovely view of the countryside from the towers of the castle. Other than one other woman, we were the only visitors to the castle that day, and we took our time wandering through every room of the expansive structure, including the prison cells! 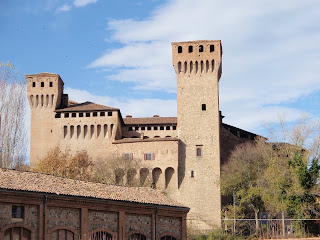 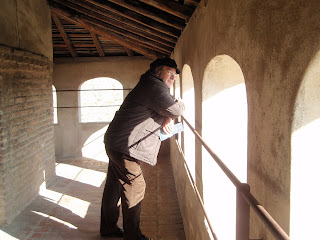 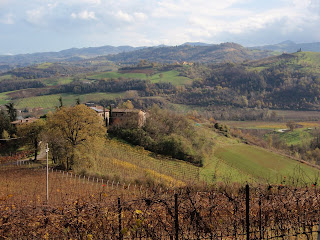 A view of the countryside


We also stopped at another small castle called Castello di Serravale. We could only see it from the outside, as it is privately owned. The wind started picking up as we made our way back to Modena, and it was cloudy again when we arrived back at their house. Marvi had fixed another wonderful meal, a risotto followed by a Modenese meat dish and pureed (mashed) potatoes . This time I was careful to pace myself with each course, instead of eating too much of it.

After the meal, Marco went to university for his Latin class, and Marvi and I took a walk in Ferrari park. The park began as a landing area for small planes and gliders. The area was also used as a race track, until 1976. Along the walking path, there are busts of famous piloti, race car drivers. I learned that Modena is also known as Terra dei Motori (Land of Motors), because it is the home of not only Ferrari automobiles, but Lamborghini, Maserati and other sports cars were either founded, headquartered or built within a few kilometers from the city.

By the time we got back to their flat, it was time for me to head to the station to catch my train back to Florence. I had a good visit with Marco and Marvi and hope to see more of them next spring.

Email ThisBlogThis!Share to TwitterShare to FacebookShare to Pinterest
Labels: Modena