My departure from Firenze was uncomplicated. I took a last stroll around centro storico about 9 am and left the apartment about 10. I caught the 23 bus at Piazza Salvemini, literally due passi (a few steps) from the apartment. Several people helped me lug my two bags onto the bus, and 15 minutes later, I arrived at the train station, Santa Maria Novella. Again, I was helped with my luggage by a sturdy young man, and settled in for the fast, 90- minute trip to Rome on the Eurostar.

Carlo met me at Termini, Rome's train station, and we drove to the EUR district where he and Lidia live. It was a warm and sunny day in Rome, and I was happy to be there. It felt like a good transition between my two worlds: Florence, Italy and Lawrence, Kansas, USA. After eating a quick lunch, Lidia and I headed out to an interesting museum called Centrale Montemarini, where we saw the exhibit Gli Dei e Le Macchine e (Gods and Machines). 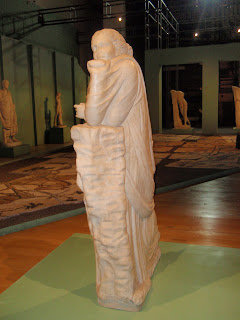 The exhibition is located in the former John Montemartini Thermal Power Station, which was converted into a museum in 1997 when hundreds of sculptures were moved there during the restructuring of large sections of the Capitoline museum complex. It was a striking contrast to see sculptures in this setting, but I enjoyed it. 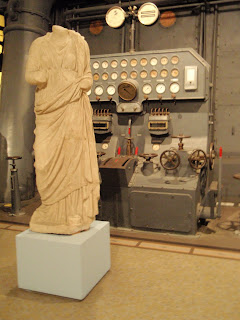 Lidia also took me to the Basilica di San Paolo Fuori le Mura, (Saint Paul Outside the Walls), a magnificent and unusual church near their flat. Monks were singing vespers when we entered the church, and it added another dimension to the experience. You can get an idea of the place by visiting the following site, which has a virtual tour, complete with the sound of the monks in the background. This was by far my favorite of all the churches I visited this fall.

The next day, both Carlo and Lidia had other engagements, so I was on my own to explore the city. I rode the metro with Lidia into town, then took a bus to Piazza Navona, one of my favorite spots in Rome. It was sunny and the piazza was filled with artists, street performers and several musicians, entertaining the tourists strolling by. 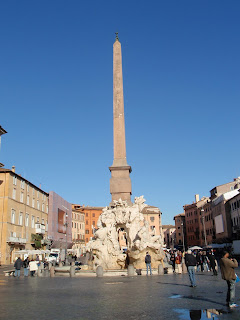 The Fontana dei Quattro Fiumi or "Fountain of the Four Rivers," by Bernini, stands at the center of the Piazza, and commands everyone's attention. I spent more than an hour walking around the Piazza, enjoying the sunny weather and the talented musicians, and I shared the experience by phone with my friend Luigi. It was delightful being in a sunny piazza listening to music on my last day in Italy. 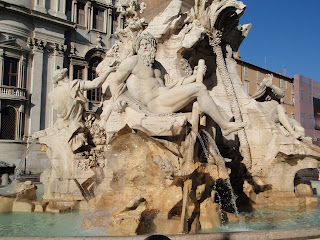 Fountain of the Four Rivers

I strolled over to the Pantheon, another favorite spot, and then visited the Fontana Trevi (Trevi Fountain), always crowded with tourists. 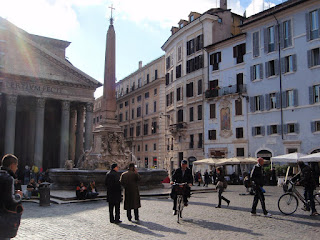 Piazza della Rotonda, with the Pantheon in the background 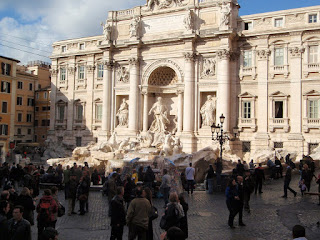 In the afternoon, I went to several art exhibits. The first was I Grandi Veneti (The Great Venetians), which included works by Bellini, Tiepolo, Titian, Tintoretto, Canaletto, Gaudi and Veronese and other famous Venetian artists.

However, the second exhibit was even better "Vincent Van Gogh: Campagna senza tempo e città moderna" (Vincent Van Gogh: Timeless Countryside and Modern City). 70 works of art were on view, including paintings, watercolors and sketches on paper by Van Gogh, as well as 30 works by artists who inspired him, including Millet, Pissarro, Cézanne, Gauguin and Seurat. This exhibit is by far the best one I have ever seen. In addition to the paintings, one can view letters that Van Gogh wrote to his brother Theo, which often included sketches of his ideas. Books that inspired him were also on view, as well as newspaper articles that were written about Van Gogh during his lifetime. This was a truly amazing and powerful exhibit, and I'm so thankful I had the chance to see it.

While I was at the Van Gogh exhibit, the weather changed: storm clouds blew in and there was a good downpour while I was in the museum. But it blew over by the time I came out, and I strolled down via dei Fori Imperiali toward the Colosseo. 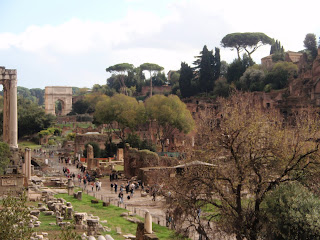 Viewing these Roman ruins is impressive, even from a distance. I went on a tour of them with Carlo last year, so I was content to just pass by them this time on my way to the metro. It's always a thrill to see the Colosseo, an immense tribute to the Roman empire, providing an unusual contrast to modern city life. While cars whiz by, buses queue up for passengers across the street, and people rush in and out of the metro entrance, the Colosseo stands solidly serene in the midst of it all. Though I'm happy to visit Rome, and enjoy knowing my way around the Eternal City, it doesn't affect me as Florence does, and after a few days, I'm ready to leave. 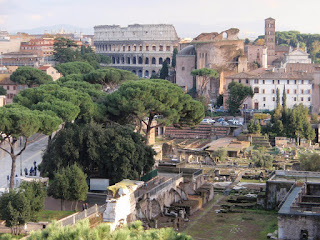 A view of the Colosseo amidst the Marine Pines


Back at the Spighi flat, Lidia prepared dinner, and I packed my bags in preparation for my departure early the next morning. Little did I know what an adventure it would be getting to my flight! I'll explain in the next post...
Posted by marybeth at 6:59 PM