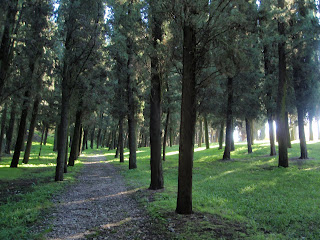 Yesterday I woke up with the images of the green trees filling my mind, so I decided to return to the forest path behind San Miniato. It was another sunny day, perhaps the last warm, clear day that we'll have for awhile, and I wanted to see more of my new safe haven. 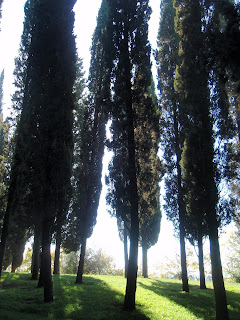 I often feel a longing to be alone in nature, something that was initiated back in 1994, when I traveled to Ireland. While I was there, I became enchanted by a certain tree and spent a week in Killarney National Park. It was the first time I experienced nature as a sacred space. There was a cathedral near that park, but I felt more at home in the park than I did in the church, and it seemed they both radiated a similar energy that one might refer to as " sacred space." Since that time, I've often felt the need to be alone in nature.

My initial trip to Italy in 2006 was planned around locations where I would be able to experience nature: Le Cinque Terre, Lucca and San Gimignano, in particular. In le Cinque Terre, I hiked alone along the Ligurian Coast; in Lucca, I spent time with the trees and the botanical garden; in San Gimignano, I discovered a path outside the city wall that offered stunning views of the countryside, and spent much of my time there, alone with the trees.

Even though I now have many Italian friends in various parts of Italy, and a more active social life while I'm here, at times I still have a longing to be alone in nature. This longing has been partially satisfied by visits to Lucca, Cortona, Segonzano and other places I've gone this year. But finding a sacred space in Firenze has been difficult, and I've gone north, south, east and west around the city looking for one!

I enjoy the park in Piazza D'Azeglio, but it's not really a sacred space. Nor is Parco delle Cascine: though grand and large, it doesn't fit the bill. Il Giardino di Boboli is vast and lovely, but again, not a sacred space. (Besides, there's a charge for entry and it's only open certain hours.) And though I enjoyed the formal gardens at the villas last week, they didn't do the trick for me. But the forest path behind San Miniato is "just right." I can get there within 10 minutes by bus, riding uphill along the lovely tree-lined Viale Michelangelo. The area seems to have few visitors, and once I cross the threshold into the forest, the city noises recede and I'm in paradise. Only the sounds of nature permeate this wooded area, and yesterday I heard many happy birds in the marine pines on the hills below. 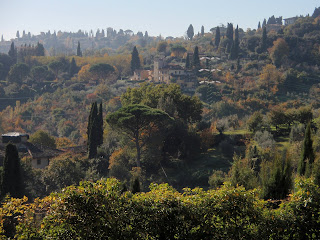 I walked along the path, back and forth, and lingered in the sun to view the valley below. Encantevole! (enchanting)
Posted by marybeth at 8:52 AM

Just catching up on blog reading after this beautiful computer kept me away from my computer. Have enjoyed your thoughts on Italian TV, your visit to San Minato and your appreciation of being alone with nature. I am lucky that I can get that feeling by taking a walk away from the lake and into the countryside.