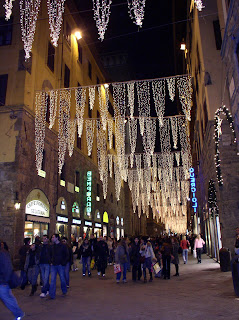 It's a melancholy evening as I stroll through the wet streets, one of my last evenings in Florence this year. For the moment, it's not raining, but few people are out and about, and most businesses are closed. It seems quite unusual at 8 pm, but the rain and the cold weather has chased everyone indoors this weekend.

I walk the "square,'' as I call it, from my apartment to the Duomo, then along via Calziuouli to Piazza Signoria, down Borgo dei Greci to Santa Croce, and back to my apartment along the vacant side streets. It hardly takes 30 minutes along the empty streets. It's odd to see the piazzas devoid of people, and hard to believe that just last weekend this same route was crowded with people late into the night.

City workers have been putting up strings of Christmas lights on many of the streets; I'd hoped to see them before I leave, but they remain still and lifeless in the dark. Purtroppo, the Christmas season won't be initiated here until next weekend, after I'm back home in Kansas.

I'm eager to leave the cold and rain, but leaving Florence is another matter; it's become like a second home to me. And even though I'll return in the spring, I hate to think of all that I'll be leaving behind, especially the friends who have opened their hearts and their homes to me. Fortunately, by way of Skype, we can continue to share our lives every week. Only a few days left of my stay here...che peccato!
Posted by marybeth at 1:53 PM