One of the most popular sites to see in Barcelona is Gaudi's Casa Mila, or as the locals call it, La Perdrera (the Quarry), due to the odd exterior. Gaudi was selected to design and build a home for the flamboyant developer Pere Milà. Casa Mila was constructed between 1906 and 1910, and was listed as a UNESCO World Heritage site in 1984 for its uniqueness, its artistry and exceptional universal value.

Now the headquarters of a  Catalan Foundation, Casa Mila houses a cultural center for exhibitions, lectures and other activities that are held at the site. The architecture is considered structurally innovative, with a self-supporting stone front, and floors that are free of load bearing walls.

Each admission comes with a free audioguide, and people are directed first to the courtyard, which gives an idea of how many offices and rooms there are in the still pristine building.


Since most of the building is now used as offices, only two floors are open to visitors: the ground floor entrance and the fourth floor. After visiting the courtyard, visitors are then directed to the roof, filled with many unusual chimneys that Gaudi designed. Once covered in  fragments of broken glass, tiles and marble, they have been restored and now present a more pristine appearance. 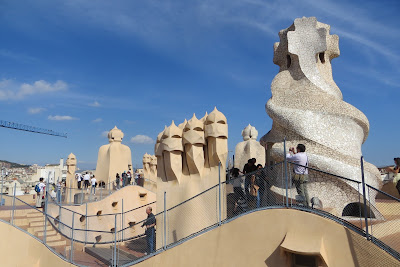 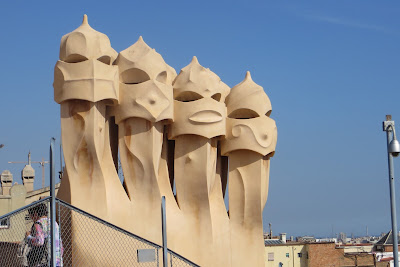 The 28 chimneys are often referred to as espanta bruixes, or witch scarers. As I've shown photos of them to others, many comment that George Lucas must have been inspired by Gaudi in the design of his Star Wars characters and scenes.

After a thorough examination of the roof and chimneys, we were allowed to return to the fourth floor, which is furnished in the style of the early 1900s, when the Mila family lived there. I was disappointed to learn that most of the furniture that Gaudi designed had been removed from Casa Mila. However, it was still interesting to see what it would have looked like in 1912.

After visiting the fourth floor, we left the building through the courtyard, which has vividly colorful ceiling and walls as shown below.

Though I enjoyed the unique artistry and architecture of Casa Mila, I was in for a greater surprise when visiting other Gaudi sites in Barcelona.
Posted by marybeth at 9:46 PM