The Basilica de la Sagrada Familia (Basilica of the Holy Family) is often considered to be Gaudi's greatest masterpiece, even though it is still unfinished, more than a 130 years after its beginnings. Plans for a 2026 completion date have been established, to commemorate the 100 year anniversary of Gaudi's death. The building is now in it's 133rd year and is approximately 70 per cent finished.

Like Gaudi's other sites in Barcelona, the Sagrada Familia is a UNESCO World Heritage Site (1984), and was consecrated as a Basilica by Pope Benedict XVI in 2010.

Once complete, the church will feature 18 spires, dedicated to religious figures, including the Virgin Mary, the twelve apostles and the four evangelists, of varying heights to reflect their hierarchy. As of this date, only eight spires have been completed. And in the middle of it all will be the Tower of Jesus Christ, which will measure over 172 metres (564 feet) and make the Sagrada Familia the tallest religious building in Europe.

Work started on the church in 1882, and Gaudi took over the following year, radically changing the original design. He worked on the church until his death in 1926, when it was only about 20% complete. Parts of the church, along with Gaudi's models and workshop were destroyed during the Spanish Civil War by Catalan anarchists. The current design is based on reconstructed versions of Gaudi's plans, along with modern adaptations. In addition, computer-aided design technology has been used to accelerate construction.

The Nativity facade was built before work was interrupted in 1935 by the Spanish Civil War, and it bears the most direct Gaudi influence, as shown in the photo above.

Intricately carved, tree-like columns support the tall ceilings. Gaudi took his inspiration from nature, so that the columns are intended to look like tree trunks and branches.

As at other Gaudi sites in Barcelona, an audioguide is included in the admission price. However, we found it to be confusing and hard to follow.

When viewing the interior of the church, you will be craning your neck much of the time, in an effort to take in all the interesting, unusual and beautiful elements. The church is rich with symbology, and everything has a meaning.

Now that the naves have been closed, the interior of the church measures 4500 square meters where 8000 people can worship.

Gaudi's stained glass windows are truly majestic, with a separation of colors for more dramatic effect. It was a real challenge to take enough photos to capture the majesty of the interior.

Construction for the Passion facade began in 1954, then in 1987, the sculptor Josep Maria Subirach began to create the sculptures. They were carved with harsh straight lines to resemble the bones of a skeleton, as Gaudi intended for this facade to strike fear into the onlooker. However, I found some aspects of it to be quite lovely, including this image of Jesus tied to a pillar during his scourging. 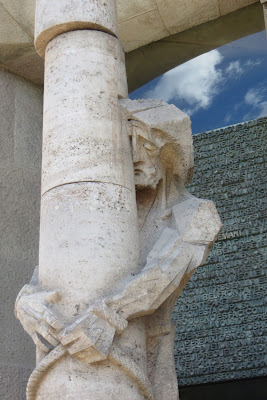 The Glory facade, which is still under construction, will be the largest and most monumental of the three and will be dedicated to the glory of Jesus. Elements of Judgement Day, Purgartory, and Hell will be included, along with the Ascension into Heaven.

If you plan to visit Barcelona, make sure you take time to see la Sagrada Familia. I booked our tickets online in advance, making an appointment for the day and time we wanted to visit. Like other Gaudi sites, there is constant tourist traffic, and planning ahead is imperative.