Castello Aragonese has a rich history, and stands like a sentinel watching over the east end of the island of Ischia. First built by Greeks, then conquered by Roman and Spanish forces, the castle is the most visited monument of the island. 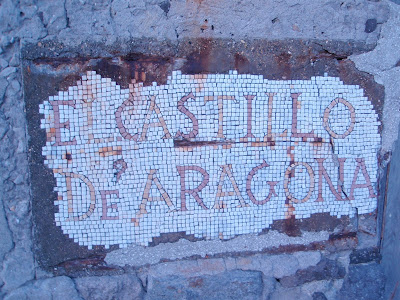 From Wikipedia:
"The castle, which stands on a volcanic rock, was built by Hiero I of Syracuse in 474 BC.  In 326 BC the fortress was captured by Romans. In 1441, Alfonso V of Aragon connected the rock to the island with a stone bridge instead of the prior wood bridge, and fortified the walls in order to defend the inhabitants against the raids of pirates."

I took a tour of the Castle one evening, just before sunset. There's an elevator to take you to the top, and then you can walk down and explore the various parts of the fortress.

Email ThisBlogThis!Share to TwitterShare to FacebookShare to Pinterest
Labels: Ischia