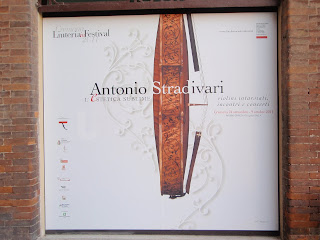 After Modena, I traveled west to Cremona, in the region of Lombardia, which turned out to be more of an adventure than I had anticipated. I thought I would be changing trains in Fidenza, but once I arrived at the train station, I learned that I'd be taking a bus from Fidenza to Cremona, instead of a train. There were only a few of us on the bus that afternoon, and it was an odd hour-long drive through the plains of the Piana Padura or Po Valley. Just before arriving in Cremona, we crossed the wide expanse of the Po River, the longest river in Italy. 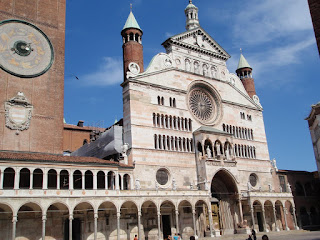 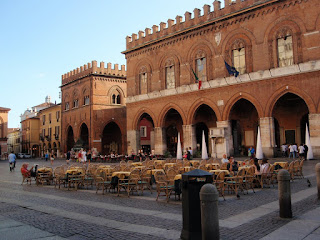 
I had hoped to go to Cremona last fall, but never made it there, due to the rainy season and other factors. I had attended a class on the art of violin-making in the summer of 2010, and was told by friends that November would be the perfect time to visit Cremona: the foggy fall weather would provide the perfect backdrop to both the Cremonese music and food traditions. I wrote a post about Cremona and violin-making which provides some background about my interest in the town:

(The "magic" I'd associated with Cremona did not materialize while I was there, but perhaps I'll visit again with a companion on some misty fall day in the future.) 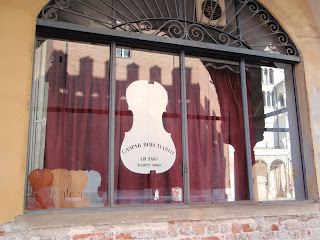 A liutaio shop, a common sight in Cremona

July is not the best time to visit Cremona, and I didn't hear any violin music while I was there (bad planning on my part), but I still enjoyed my one-day visit. My hotel was in the centro storico (historical center), a pedestrian area right near the Duomo and the main piazzas. My main activities were focused on visiting the Sala dei Violini (Museum of Violins), to see violins, under glass and carefully guarded, that were crafted by Amati, Stradivari, and del Gesù, as well as the Stradivari museum, housed in the Museo Civico (Civic Museum). 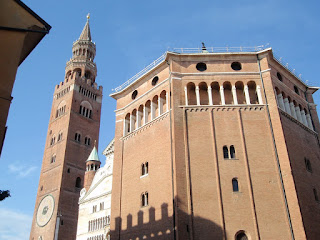 
Cremona's Torrazzo ( bell tower) is the third tallest brickwork bell tower in the world, and the second highest in Europe, while the Duomo and Baptistery are famous as being among the most well-known sites of Romanesque-Gothic art in northern Italy. 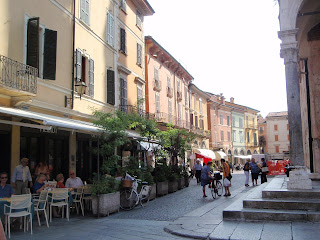 A typical street in the centro storico

A popular gathering place in Cremona is Piazza Roma, which is actually a large park, with this lovely sculpture as one of several fountains. 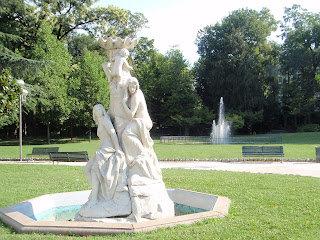 More affluent than other parts of Italy, Cremona is filled with outdoor cafes in every piazza - often two or three of them - and I saw no evidence of the need to lock up the cafe tables and chairs at night that is common practice in most Italian tourist areas. 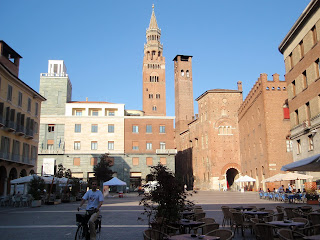 
Every Thursday night during the summer, Cremona hosts a "Shopping Festival" from 9-11 pm, and features music, exhibits and shopping specials to attract people to the town center. Since I was there on a Thursday, a rock band set up camp outside my hotel window, playing until midnight, and the most popular exhibits were hosted by motorcycle and antique car dealers. Hmmmm: not the kind of culture I expected to find in Cremona! But I found the town quaint and interesting and would like to go there again, sometime when I can attend a violin concert. 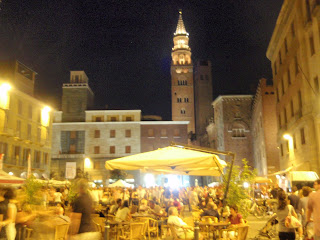 When I left Cremona, I had a two-hour wait for my train connection in Fidenza, so I took a stroll downtown, which was only due passi (one block) from the station. 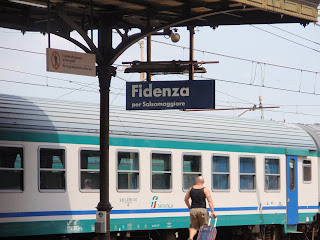 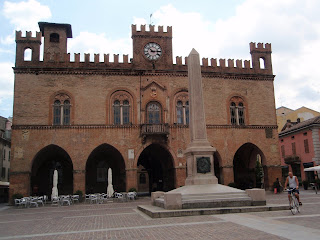 Not much was going on, as it was during the early afternoon, when everything closes up for several hours. 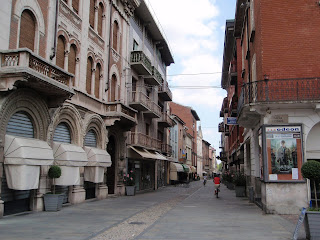 I came across a sweet little park, where I stopped to eat some fruit, then strolled back to the station, eager to move on to my next destination: Firenze! 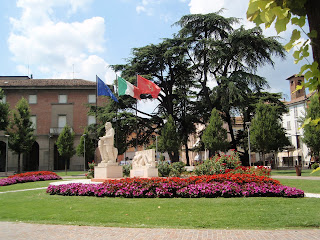