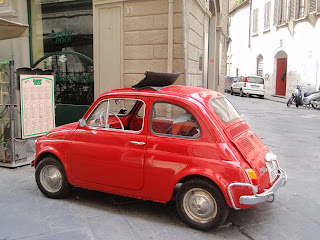 Classic Fiat 500 in my old neighborhood in Florence

My last stop on my tour of northern Italy was to spend a few days in Florence, the city where I've spent many months over the past 5 years. I was expecting torrid temperatures and swarming crowds of tourists, but when I arrived on a Friday evening, the streets were relatively empty, and the weather had cooled considerably.

On Saturday, I went to visit Santa Croce, which I'd done once before in 2006. I wanted to see the tombs of Michelangelo, Dante and Galileo again. But the main reason I went was to be able to take a guided tour of the restoration of the Gaddi frescoes later in the day. 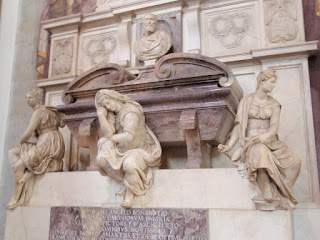 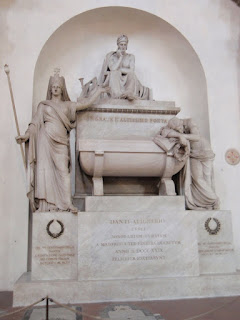 Dante's tomb (though he is buried in Ravenna)

L'arte in Cantiere (Art Restoration Site)
The eight frescoes on the side walls of the Cappella Maggiore, the main altar in Santa Croce, are being restored. They were painted in 1380 by Agnolo Gaddi and depict the Legend of the True Cross. It was a unique opportunity to view up close the frescoes of this great artist, who was influenced by Giotto. The tour of the restoration site involves a gradual ascension up 7 levels of scaffolding, the same structure used by those involved in the restoration. There were no English tour guides that day, so I went on a tour with an Italian guide, and was able to follow most of her explanations.

For a more detailed explanation and great photos of the fresco tour, check out this post on Freya's Florence

In 2009 I had done a similar tour of the Correggio frescoes in Parma at the Saint John the Evangelist Abbey Church and didn't want to pass up this new opportunity. Few people get the chance to see these frescoes up close, since they are painted on the walls and ceilings, and it was a great privilege.

Salvatore Ferragamo: Inspiration and Vision
Another interesting exhibit I saw during my stay was the shoe museum in Museo Salvatore Ferragamo, housed in Palazzo Spini Feroni, where one can also view and shop for the lastest Ferragamo creations. Salvatore Ferragamo was a Florentine shoe designer who first became famous while creating unique shoe designs for American film stars. I went to the museum last fall, but the shoe museum had been displaced by an exhibit of Greta Garbo's clothes, which was interesting, but not what I had hoped to see. I love the creativity that Ferragamo is noted for, and the museum houses hundreds of the shoes that he crafted. The museum's footwear collection documents the entire span of Salvatore Ferragamo's career, from his return to Italy in 1927 to 1960 the year he died. For more info, here's a link to the museum:  museoferragamo

I also took time to enjoy the local artists, including performance art by this clever woman, who made graceful, fluid movements with her scarves each time someone dropped money in her hat: 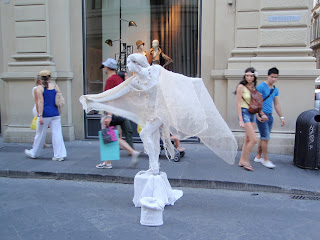 And the chalk artists, who create new masterpieces every few days on the streets of Florence. 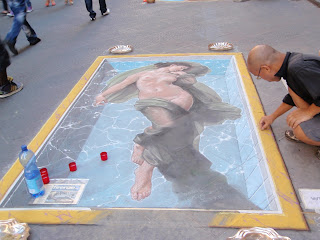 I also have to admire the many vendors who sell souvenirs, leather goods and scarves in the San Lorenzo and Mercato Nuovo street markets in Florence. 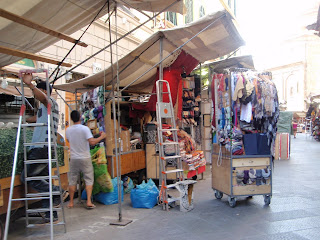 I've watched them in the mornings as they lug their heavy carts through the streets, making their way to the markets to set up their displays. I've also seen them in the evenings, as they break down the displays and pack away every little thing, then haul their carts to nearby storage areas. 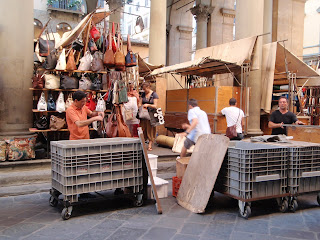 I had a taste of this type of work when I sold mosaics for several years at art fairs, but on a much smaller scale. I cannot imagine doing what many of these vendors do every day, morning and night, and then stand for hours to sell their wares, for years on end. Hats off to the vendors!

On my last night in Firenze, the albergatori (hotel staff) who run Il Bargellino, where I often stay, invited me to dinner on their terrace, along with several other single guests. The place is run by Carmel, a native of Boston, and her husband Pino, an Italian from Calabria. I've stayed with them often since 2007, and was touched to be invited to share a meal with them. 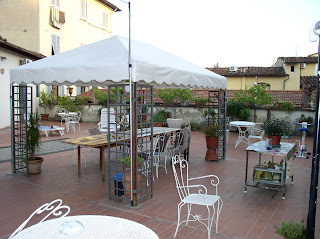 I first learned of the hotel through a Rick Steves recommendation, and enjoy both the location, the affordable cost and the ambiance of the hotel. It's located on a quiet street not far from the Santa Maria Novella train station in one direction, and the San Lorenzo market in another. One of the greatest assets of the hotel is a large terrace that all guests have access to; it's a great place to enjoy a bottle of wine and hear travel stories of other English-speaking guests.

Pino fixed a delicious pollo involtino (chicken wrapped around an herb filling), along with pasta al pesto by Carmel, wine, and a gooey, chocolate dessert. A relative of Pino's, who helps out at the hotel, was also there. The others were from Florida, Massachusetts and Belgium. I had an interesting conversation with the guy from Belgium about how recent research has shown the beneficial effects of optimism on the brain. He was in Florence for a conference on Neuroscience, and added more depth to a recent article I'd read in Time magazine on the topic. Here's a link to that article:   The Optimism Bias

Sharing a meal with others on the terrace was a lovely way to enjoy my last night in Florence, and we talked until late in the night. For more about the hotel, here's a link:  il bargellino.com

I left Florence around noon the next day, eager to return to Zagarolo and relax after several weeks of travel.

A little late calling by to catch up with your more recent posts, except this one, which sounds as if you are nearing the end of your trip once again. Another summer is flying by.
Staying positive definitely makes me feel a happier person. :)