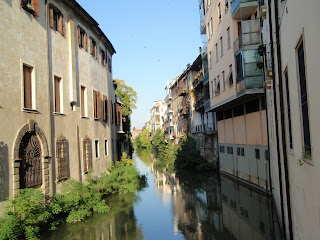 The river Bacchiglione winding through Padova

After the cool mountains, breathtaking scenery and wonderful company that highlighted my visit to Segonzano, visiting Padova paled in comparison. In fact, I'd have to say that Padova was the least favorite of my adventures this year. High temperatures and the lonely setting of my hotel were major factors that contributed to my lack of enthusiasm. Still, I managed to see some beautiful and interesting places during my two-day stay. 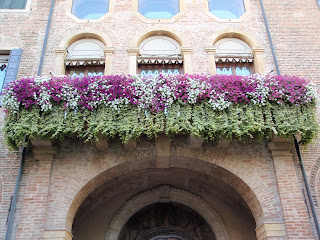 Flowers grace a building in the centro storico

My main reason for stopping in Padova, about 40 km west of Venice, was to see the Giotto frescoes in the Scrovegni chapel, and for that reason alone, it was worth the trip. The fresco, completed in 1305, is one of the most important masterpieces of Western art. Its panels portray the life of the Virgin Mary. 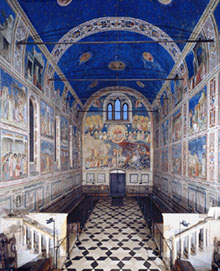 Scrovegni Chapel (photo from Wikipedia)
The Scrovegni family fortune was made through the practice of usury, which involved charging interest when loaning money. At the time, it was considered a sin so heinous that it meant exclusion from the Christian sacraments. Built on the family estate, Enrico Scrovegni supposedly commissioned the chapel as a penance for his father's sins and for absolution for his own. In fact, Dante depicted Reginaldo degli Scrovegni as the usurer he encountered in the seventh circle of Hell. Charging interest on loans is now so common, it's hard to imagine the mindset of those times.

Padova claims to be the oldest city in northern Italy, founded in 1183 BC. It is the home of the renowned University of Padova , almost 800 years old and famous for having had Galileo Galilei on its teaching staff. Other famous members of the university include Gabriele Falloppio (Fallopian tubes were named after him), Copernicus and Andreas Vesalius, who is known as the founder of the science of human anatomy. Elena Lucrezia Piscopia became the first woman graduate in the world when she gained her degree in philosophy from the university in 1678. In addition, the university's botanical garden, established in 1545, is one of the oldest gardens in the world. I took a quick stroll through the garden, filled with botanical specimens that have been studied and used for centuries.

I was able to take a short tour of the university, though Galileo's lecture hall was off limits that day, due to a conference that was being held. But we were able to see the famous anatomical theatre, which is the oldest surviving permanent anatomical theatre in Europe. In its day, circa 1595, many artists and scientists studying the human body came to view public dissections at this theatre. 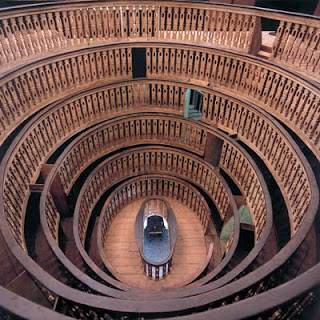 Another major attraction in Padova is La Basilica di Sant'Antonio (Basilica of Saint Anthony), otherwise known as Il Santo. Many who come to Padova come expressly to pay homage to Saint Anthony. 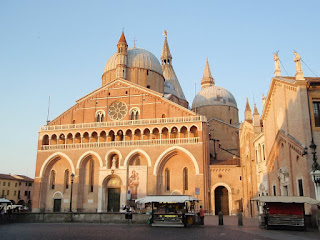 My hotel (Casa del Pelligrino) was across the street from the church, and other than visiting the basilica, not much was going on in the area where I stayed. The church is a 10-minute tram or bus ride from the centro storico, an area that is much more lively. I also had trouble finding a restaurant near the hotel that didn't cater to tourist tastes (which translates to eating poorly made Italian food). But the prices were reasonable at the hotel, and I had free wifi and aria condizionata (AC), which was a blessing in the 90 degree F weather. 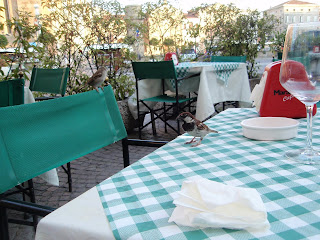 
However, at one outdoor cafe, I was joined by a small sparrow, and enjoyed sharing part of my meal with him. Padova also boasts that its Prato delle Valle is the largest piazza in Europe. 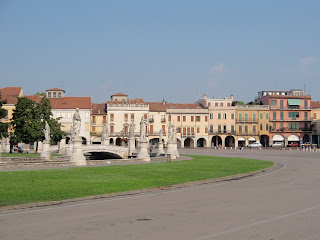 On Saturday, it was filled with vendors selling everything imaginable, but I preferred going to the other markets in town, in Piazza delle Erbe and Piazza della Frutta, where I came across this display of many varieties of rice and risotto. 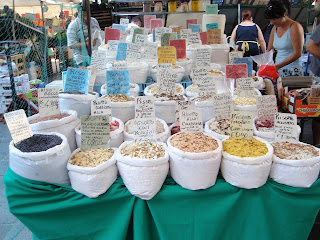 Oddly enough, there are several reasons to return to Padova. For instance, it's possible to take a day-long boat ride from Padova to Venice along the Brenta Riviera, stopping to visit famous Venetian Villas along the way. My friend Massimo in Bologna and his family went this route in the spring, and I'd like to do it myself someday. For more info on the journey and villas, click here:

With cooler weather, and more preparation, I'm sure to enjoy Padova more the next time I visit. Speriamo!
Posted by marybeth at 3:48 AM

Email ThisBlogThis!Share to TwitterShare to FacebookShare to Pinterest
Labels: Padova