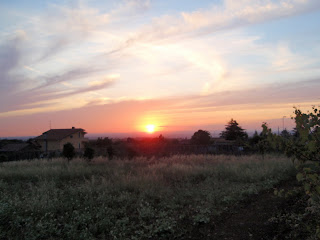 My last few days in Italy were spent hanging out in Zagarolo with Deborah, doing some online work, and packing my bags for the return trip to the States. I have the chance to return to Zagarolo next year, for two months in the spring, and another two months in the fall, so that helped to modify my sadness about leaving my new "home." And if all goes well, maybe I can stay in Italy in the months between my stays in Zagarolo. Chissá? I even left a bag of clothes and toiletries at Deborah's house, that I can use when I return.

I decided to spend my last night in Rome, as there was a nationwide train and bus strike the next day, and I didn't want to be stranded in Zagarolo without a way to get to the airport. As it turned out, the strike didn't start until after I left Rome, but I'm glad I had the chance to spend a few hours in Trastevere, where I had a wonderful meal of grilled calamari and zucchine, in Piazza della Scala. 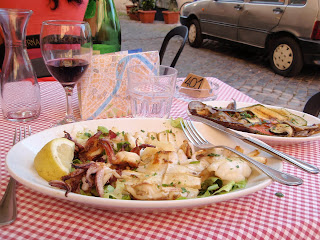 One of the smartest things I did before heading to Rome was doing  an online check-in and printing off boarding passes for my flight home, from my computer in Zagarolo. This enabled me to breeze by the long lines at the check-in area at the airport. I stayed in a B&B called Little Italy, which is only a short walk from the Termini train station. From Termini, I took the Leonardo Express to the Fiumicino airport, and hopped on a shuttle to Terminal 5, where direct flights to the U.S. depart. I bypassed the check-in area, dropped my bags off, and proceeded to the departure gate. After the incubo (nightmare) I had last year at Fiumicino, I was determined to become more familiar with the airport, and am pleased to report it went well. Here's link to last year's fiasco: Foulup at Fiumicino

In Kansas I was greeted by HOT weather, the hottest July in 100 years. For nearly three weeks, the temps were in the 100's F (38-43 Celsius), searing off blossoms on growing plants so that vegetable crops have been decimated. No tomatoes in my orto (vegetable garden)! But the basil is doing well, so at least I'll be able to make fresh pesto. And here I was worried about the heat in Italy, when in fact, hot temps were rarely an issue during my stay.

I'm adjusting to life in Kansas, and prolonging my re-entry by continuing to share stories of life in Italy.
Posted by marybeth at 11:36 AM