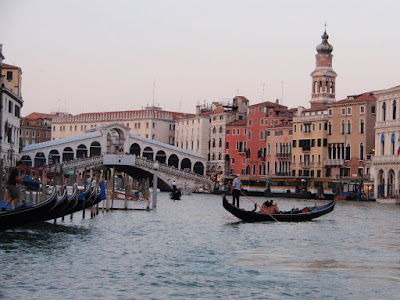 Gondola near the Rialto Bridge

Next stop, Venice, just a 30-minute train ride from Padova. I had booked a room at Albergo Doni, around the corner from Piazza San Marco, where I stayed two years ago during my first visit to La Serenissima. It's cheap but comfortable, with wifi access in their dining room, and a plentiful breakfast. Even though there was no AC, I had a large fan in my room, and it turned out to be sufficient, despite the 90° weather. 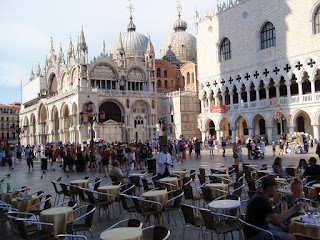 Since I had seen many of the main sights in Venice the last time, I was able to avoid the summer crowds that tend to cluster on the main drag. Most of Venice is NOT on the main drag, and it's easy to find quiet spots once you're away from the route along the Grand Canal. 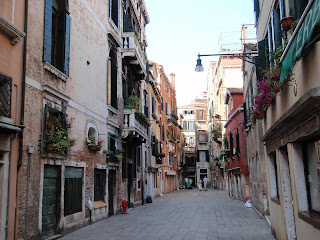 Away from the crowds

Since I had arrived before my room was ready, I stashed my bags at the hotel and took a vaporetto to the Giardini Pubblici, and hung out there for several hours. (I bought a 2-day pass that allowed me unlimited vaporetto use during my stay.) The gardens are not a part of Venice that many people bother to visit, but it quickly became one of my favorite places to hang out. 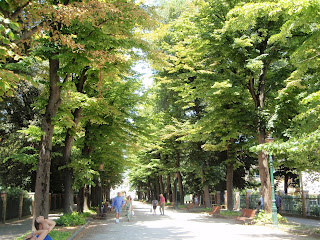 
The gardens are also the location of the internationally renowned Biennale modern art extravaganza, which I had hoped to see. But I was there too late in the day to see much of the exhibit on Sunday, and it was closed on Monday, so I missed out. 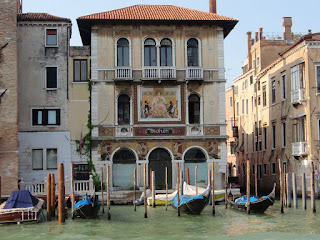 Palazzo Salviati, with glass mosaics on the facade

Instead, I spent most of Monday touring the canals, to get away from the crowds and the heat. I traveled by vaporetto to Murano, the nearby island that is famous for it glass-making factories. I took my time perusing the stores, buying a few trinkets and taking photos of creations I could never afford. 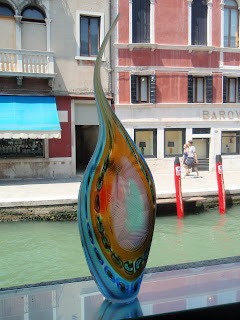 This reminds me of a heron, so graceful. 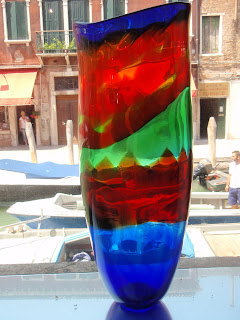 In the evening, I rode the vaporetto up and down the Grand Canal, hoping to catch a nice sunset on the water. By this time, most of the tourists had left town and I found a good spot on the boat to shoot some nice scenes. 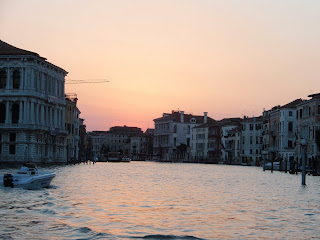 Sunset on the Grand Canal


One of the nice things that happened during my stay was having dinner with another solo traveler, a young man from Tokyo. We both arrived alone at a trattoria, and a waiter seated us together, announcing, "é sposata" (now you're married!), and those of us who understood had a good laugh. We spent several hours talking about our travels, and I told him of my son's experiences living in Tokyo; it was a sweet, unexpected interlude. 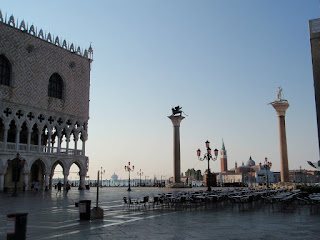 I hadn't really expected to go to Venice this year, so I'd left my maps and travel guides at home. But even so, I managed to fit a lot in during my 2-day stay. There's much more to see, and I have yet to ride in a gondola, so I'm sure to visit Venice again.
Posted by marybeth at 1:30 PM