I had a short and sweet time in Verona, spending one night in a hotel near the main Piazza Bra and the famous Roman Arena where opera and music concerts are often performed. 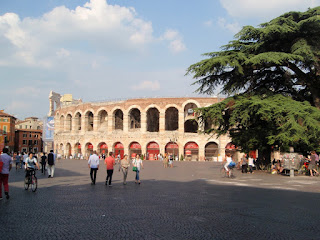 Piazza Bra and the Verona Arena

And of course, Verona is also known as a city of romance, the home of Romeo and Juliet, and many people come to see a balcony attributed to the Shakespeare scene where Romeo visits Juliet. Though the balcony was added to an old building in 1936 to create a tourist attraction, no one seems to care that it's just a come-on. 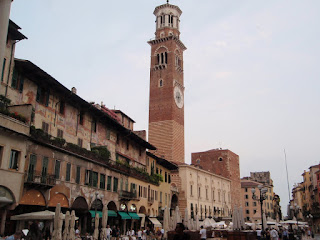 
Two things that I really enjoyed: climbing 368 steps to the top of the Torre Lamberti, and visiting the Roman Theater early in the morning when no one else was there. 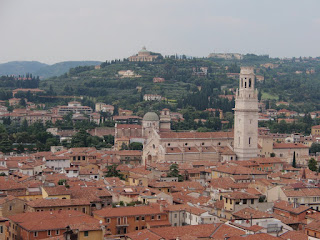 View of Verona from Torre Lamberti 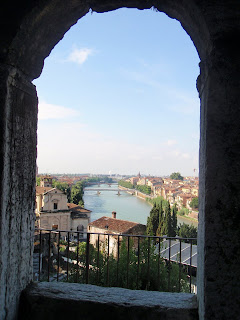 view of Verona from Roman theater 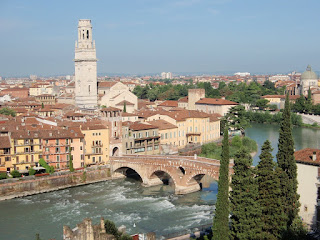 view of Verona and Adige River

That night there was a Ricky Martin concert in the Arena, but instead, I headed across town to a free concert of Tango music, performed by a 5-man group from the music conservatory. The concert was held under the stars, in a cloister of Verona's beloved church, Sant'Anastasia. An Italian man sat next to me, and we chatted off and on during the evening. After the concert, he invited me to have a glass of wine, and we had a nice time talking. Around midnight, he wanted to drive me up into the hills to see Verona from above, but he was a bit too eager, and I was unsure of his intentions, so I declined. I suggested that we walk through the quiet streets of Verona back to my hotel, which didn't appeal to him, and so we parted ways. Still, it's a nice memory to have been courted for a few hours in Verona by an attentive Italian man.

I enjoyed my stay in Verona, and would like to return some summer day to attend a Puccini opera in the Arena.
Posted by marybeth at 12:15 PM

Email ThisBlogThis!Share to TwitterShare to FacebookShare to Pinterest
Labels: Verona