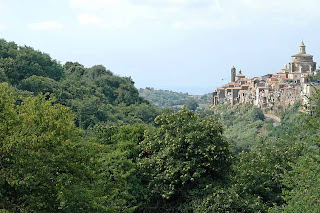 The village of Zagarolo, high atop a tufa hill.


The house where I'm living is in the countryside outside of Zagarolo, which is about 20 miles southeast of Rome. Actually, I'm house-sitting for a friend who went to Canada for two months. She has a large yard, vegetable garden and 7 cats that need looking after, so I agreed to stay while she pursues her own travel adventures in British Columbia. The house is a 10 - minute drive to the village of Zagarolo, population @ 15,000 people. Many people who live here work in Rome, and have easy access to the train for commuting. Unfortunately, I'm unable to walk into town, as I'd hoped. The roads are narrow, winding, and hilly, with no shoulders and speeding cars. So instead of trying to walk into town, I drive to a city parking lot at one end of town, and walk to the other end and back again for a pleasant hour's stroll. As you can see from the above photo, the town is on a hill, surrounded by a forest of trees below.

Zagarolo is located in an area of Italy called Castelli Romani, which translates literally to "Roman Castles," but actually refers to a group of hill-towns located along the slopes of the Alban Hills, an area created long ago by volcanic activity. Home to many civilizations before the Romans, the Alban Hills became a rural summer retreat for Rome's wealthy residents.
Although fairly popular as weekend day trip destinations, the towns aren't touristy. They maintain a sense of the Italian small village life. While I'm here, I'm hoping to visit a variety of the 20-some villages that make up the Castelli Romani. 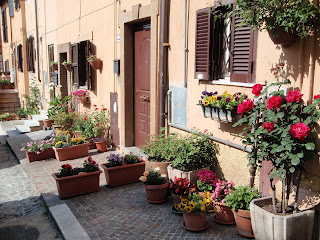 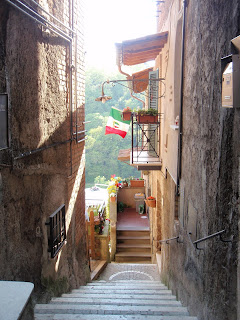 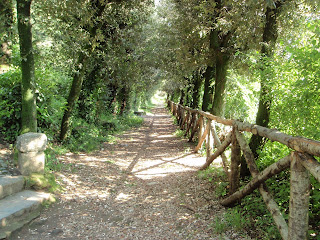 A view from il giardino publicco (city park).
Posted by marybeth at 6:26 AM