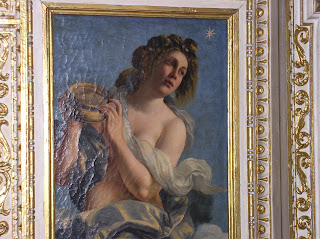 One of the main attractions in Florence, of course, is the art. Creativity surrounds you in this city: it's inescapable. One of the things I most enjoyed about living in Florence last year was the endless variety of creative activities going on all over the city, all at the same time. This visit was no different, and I tried to use my time wisely to indulge my creative interests. First, I went to an art exhibit at Palazzi Strozzi, entitled Picasso, Miró, Dalí. Angry Young Men: the Birth of Modernity
Though not usually attracted to modern art, I found this exhibit to be extraordinary, as it was a collection of their early works, and explained how the three artists influenced each other during a crucial time in the evolution of modern art. For more information, here's a review:
art daily

Next, I went to visit Casa Buonarotti for the exhibit, THE SCHOOL OF THE WORLD: Drawings by Leonardo and Michelangelo in comparison. The museum is located in the Buonarotti home. 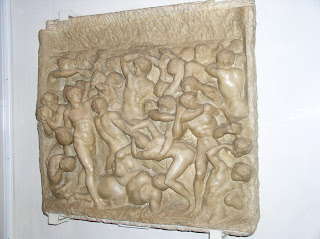 Michelangelo Buonarroti Battle of the Centaurs: 1490-1492

This is one of Michelangelo's first attempts at sculpture, completed during his adolescence. I first visited the museum in 2006 to see a painting done by Artemisia Gentileschi, located on the ceiling of one of the rooms. Here's the entire painting: 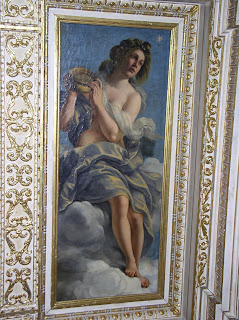 Other places I visited:
Basilica of Santa Maria Novella:Which houses works done by Botticelli, Ghirlandaio, Brunelleschi, Lippi, Ghiberti, and others. Though I've often walked by the church, I'd never visited it, and it was well worth the 3, 50 euro entrance fee. 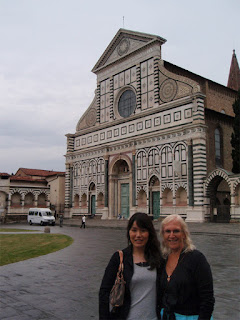 Haruko and I in front of Santa Maria Novella, 2009 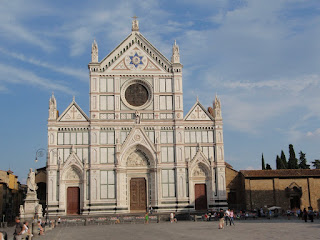 
Cenacolo di Santa Croce (Santa Croce's Last Supper)
On my last night in Florence, I came across another unexpected event: a free concert of Gregorian chant in the Santa Croce church. I was told to go several hours in advance, as there would be limited seating room for the concert. First, I had a simple meal of risotto with mushrooms and a glass of red wine at an outdoor cafe by the church. Then I waited on the steps of the church, as told, but it was unnecessary, as there was no line until shortly before the concert started at 9pm. The concert was performed by a lay chorus and was pleasant, but not outstanding. The best part of the evening was being able to sit in a room that is usually off limits, surrounded by a largely Florentine audience.
Posted by marybeth at 9:43 AM