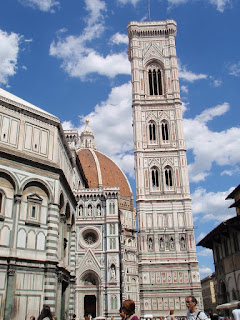 I went to Florence for a few days to celebrate my birthday. I'd planned to meet up with an Italian friend, but when that didn't come through, I let fate choose my activities. As usual, fate had wonderful plans in store for me.

I arrived at the Campo di Marte station, near the hotel where I was staying. It's not far from my old "neighborhood," and my friend Haruko had recommended the place to me. I got a 40% discount on my train ticket from Rome for using this station (across town from the main one) and buying it 2 weeks in advance, so I saved about 30 euros on my round trip tickets. I had a pleasant 90-minute ride on the high speed FrecciaArgento (silver arrow) train, and during the ride, I learned about several museum discounts I could make good use of in Florence from the free magazines that were provided in the train.

Arriving in Florence was like stepping into a furnace, and a blast of hot air greeted me. Traffic and the sound of sirens was also an active presence, a contrast to my quiet life in Zagarolo. Before I got my bearings, I'd wandered in the wrong direction, so it took longer to locate the hotel than expected. A young Japanese woman met me at the hotel and showed me around, then left to prepare for a concert. (She plays 2nd violin in an orchestra that would be performing Verdi's opera, La Traviata, with a full cast and chorus, that night in Piazza della Signoria. It would be the perfect way to celebrate my birthday!) 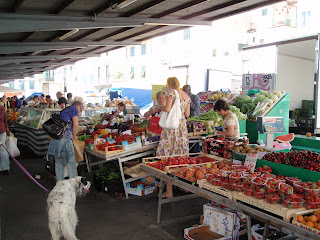 After getting settled in at the hotel, I was eager to get out and about in my favorite city. I stopped by the Sant'Ambrogio open market to buy some fruit and decided to have lunch in a cafe there that is frequented by locals. I was seated with others who were eating alone, and was curious about what they were eating, so I asked the young man across from me about his salad. He offered me a taste of the insalata di lingua (beef tongue salad), saying it was quite delicious, and when I had a bite, I agreed! He was a friendly young Florentine, and we had a lively conversation in Italian while we ate. When he learned that I often spend time in Italy, he asked why, as many Italians do. Their perception of their country as flawed makes them wonder why foreigners want to live there. When our meal was done, he wished me Tanti Auguri for my birthday and Buona Fortuna for my life in Italy. A warm welcome, indeed! 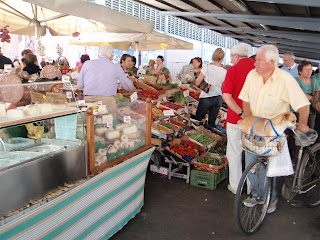 
After lunch, I strolled over to Piazza del Duomo, along my usual walking route through the centro storico, and stopped in at the Paperback Exchange store, hoping to find a few good books in English to take back to Zagarolo with me. I'd looked in Rome for a similar bookstore with used paperbacks a few weeks ago, but the only one I'd heard of had closed, apparently some time ago. Last fall I often frequented the store in Florence, and this time I came away with three good reading choices, costing me only 4,50 euros for the lot! More info can be found at this link:

That evening, I arrived early to Piazza della Signoria, as there was a seating area cordoned off and I wanted to be able to claim one of the seats, knowing the opera would be several hours long. Otherwise, there are no other places to sit in the large piazza. While waiting, I stopped for a gelato, a mainstay of my diet while in Florence. 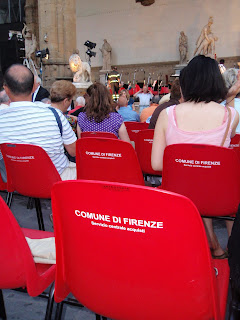 A view of the stage from my seat in the piazza

As soon as they opened the seating area, I located a spot with a great view of the performance area, located inside the Loggia dei Lanzi, where many famous sculptures are located. It was my great good fortune to be there: if I'd not heard about the concert from la violinista at the hotel, I would not have known of the event. I'd seen the opera once before, a university performance back in Lawrence, and I was familiar with the story. But it could hardly compare to the quality of this night's performance.

However, the mood of the evening was mixed, as the event was planned to commemorate la strage dei Georgofili, a massacre that took place on May 27, 1993 in front of the Uffizi gallery, a bombing attack perpetrated by the Mafia after the arrest of a Mafia boss. In fact, the first hour of the evening was devoted to impassioned comments about the loss of lives that day, and how the Mafia continues to trouble the lives of many Italians today.

By evening, the air had become cooler, making me wish that I'd brought a scarf along with me. The opening comments began at 9 pm, followed by the performance at 10 pm, and ending at 12:30 pm. I had a long walk back to the hotel, but the air had grown cool, the pedestrian-only streets were well-lit and it was a pleasant walk, amidst others out late that night. 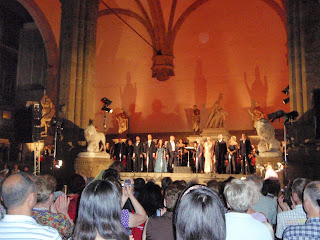 
For me, many different kinds of emotions were in play throughout my first day and evening in Florence, and one of the strongest was a sense of homecoming: there, in one of the most beautiful cities in the world, I feel at home. And now I have a beautiful memory of a very special birthday, grazie a Firenze.