May Day in Rome 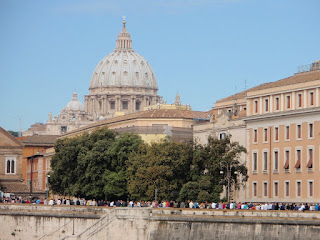 a view of St. Peter's Basilica from the Tiber River

I spent Sunday, May 1st in Rome. Deborah and I caught an early train into the city, and parted ways at Termini train station. She was headed for her flight to Canada, and I was curious to see what May Day would be like in the Eternal City. I arrived at 8 a.m., and it was relatively quiet in the streets.

I'd planned to take the Metro to the Vatican, but the entrances to the subway in Termini were closed. Everywhere I looked, there were all kinds of policemen: security had been stepped up to accommodate the large crowds expected that day. Not only was it Worker's Day (a national holiday), but Pope John Paul II was being made a saint at the Vatican. People had come from all over the world to attend the beatification. Many state museums, including the Pantheon, were open free to the public for the holiday. 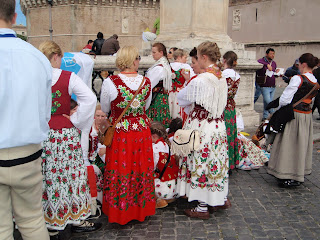 Polish pilgrims in native costume, who came to honor their Pope

I hopped onto one of the shuttle buses going to St. Peter's Square, but it dropped us off instead at Piazza San Giovanni, quite a distance away. A crowd was accumulating there to watch the festivities on a Maxi-Screen. And later in the day, it would be the site for an annual free concert, with many big name stars performing live for the Romans. With no interest in watching a big screen, I moved on.

I continued walking along the Tiber River towards the Vatican. It was a warm day, but very few people were walking in that part of town. Many streets in Rome had been closed off for the day, and it was eerily quiet. However, by the time I was nearing St. Peter's, Mass had already started, and there were so many people it would be impossible to actually get into the Piazza. 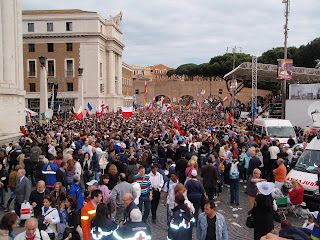 A million and a half people were in attendance

Since I'm not one of the faithful, I hung around on the fringes of the crowd, and observed their vigil. 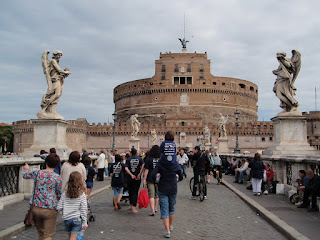 Crossing Ponte Sant'Angelo, a bridge across the Tiber,built in 134 A.D. by
Emperor Hadrian. Often called "the pilgrims bridge," it leads to St. Peter's Basilica.

After I while, I decided to move on, and headed back across town to Piazza Navona, one of my favorite places in Rome. I wanted to visit the nearby church of San Luigi dei Francesi, where there's a famous Caravaggio painting. However, a big screen had been set up in the church, and it was filled with people watching the festivities at the Vatican. I ambled down to the Pantheon, only to find it was closed while Sunday Mass was going on. So I walked over to the Spanish Steps instead. I'd been there several times before, but always in the fall. This time I was able to see it decorated with flowers in full bloom. 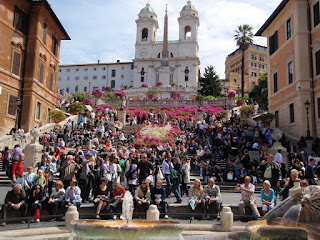 
I doubled back to the Pantheon, and this time was able to go inside. It's always amazing to see this ancient temple, built in 126 A.D. by Emperor Hadrian. 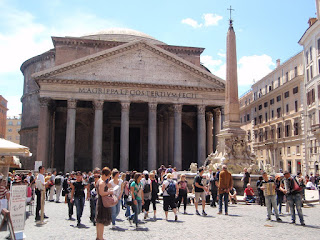 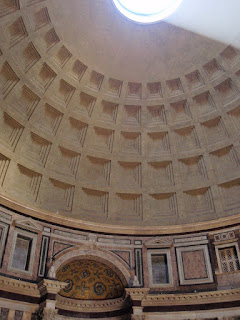 Its dome is still the world's largest unreinforced concrete dome.


By this time, I'd been walking for nearly 5 hours, so I caught a bus back to Termini, found a train to Zagarolo, and drove back to Deborah's, on my own for the first time. All in all, a good May Day!