I vespi ed i gnudi 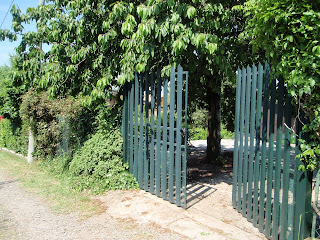 Il cancello (the gate) in the alley.

Well, so much for help with the hedges. A young man had offered his help trimming the hedges, as I'm allergic to wasp stings, the kind of allergic that can be deadly. The hedges are covered with honeysuckle vine and other tasty flowers that wasps enjoy, so they've made nests in the greenery that lines the alley. 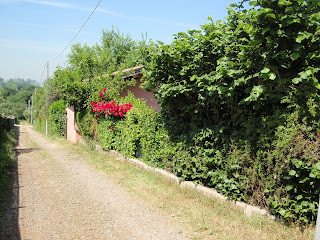 The long hedge in the alley that must be kept trimmed.
(The yard extends beyond the 2nd telephone pole.)

I was not looking forward to overseeing Mauro, as I wasn't sure he was eager to do the work. But when the appointed time came, he was a no-show. While I was waiting for him to appear, I started trimming myself, and made it through a third of the length of the hedge. Since it was early in the morning, the wasps were not active, and I had long sleeves, long pants, gloves and a hat on, just in case. I'm usually working in my yard at home this time of year, and I enjoy the satisfaction that comes from sprucing things up. After waiting 90 minutes, it seemed obvious Mauro was not coming. He called an hour later: "sorry, I'm not feeling well, maybe next week I can help you with the plants." I told him that while I was waiting, I started doing the work myself, and I could finish it without his help. And he needn't worry about coming in the future. I didn't enjoy waiting nearly three hours to learn he wasn't coming, and I didn't want to deal with that again. Too bad: he missed the chance to make 50 euros helping me out this month.

By that time, it was heating up, so I turned my attention to another task: making gnudi. I discovered gnudi (naked ravioli) last year at a restaurant in Florence. It was quite delicious and light, an unusual find in Italy, where heavy meals are more common. Considered a Tuscan dish, it is similar to the filling that is often used in ravioli, but with gnudi, there is no pasta. 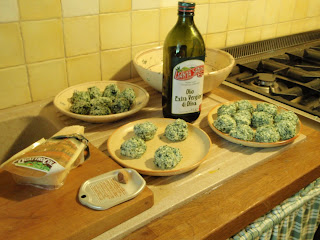 Basically, it's a mixture of spinach, ricotta, parmigiano, eggs, and spices, formed into balls and then boiled. It can be served with a tomato-based sauce or sage butter. There are many recipes available online, and I'm still learning the process myself, so I won't include the ingredients here. If you're curious, here's a basic version:

I'd tried making gnudi several times at home, but both times they turned out too heavy, due to an excess of flour. Today I used ultra-fresh, locally made ricotta (from a dairy down the street!), and the mixture turned out much fluffier than before: a good sign. I only added a little flour this time and though the gnudi turned out nicely formed, they were a little bland. I'll remix it tomorrow, add a few more spices and see what happens. I'm hoping to master this dish while I'm here, so I can serve it to my Italian friends with confidence.
Posted by marybeth at 2:57 AM