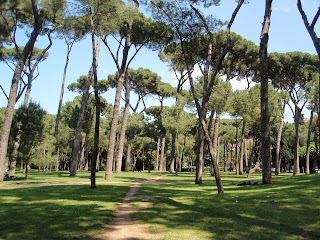 Pincio, a park in Rome

Yesterday I ventured into Rome again, eager to see an exhibition of the art of Tamara de Lempicka. I'd never heard of her name before, but I had seen some of her paintings, in the Art Deco style that she's famous for. In 2006, there had been an exhibit of her work in Milan while I was there, but I didn't go, and wanted to be sure to catch it this time. De Lempicka had an interesting life, and is known for her emancipated images of women, painted during the 1920's.

There were 90 paintings, 30 drawings, 50 photographs and 2 short films on view at the Vittoriano complex in Rome (Via Di San Pietro In Carcere) from 11th March to 10th July 2011.

Here's a link to a website that has images de Lempicka's paintings, along with a link to her biography:

Another site that highlights her paintings:

To get to Rome, I drove to the train station, locked the car up in a nearby parking lot, and waited for the train. I bought a special pass, called a BIRG ticket, which should allow me 24 hours of use of trains, la metro (subway) and buses, at a cost of 6 euros. It seemed like a good deal at the time, as taking the train back and forth alone would cost 5, 40 euros.

I looked at the list of the upcoming train departures to check which binario (track) the train would be on. There was a crowd of people waiting at one track, so I joined them, oblivious to the fact that I had looked at the arrival screen instead of the departure screen. Once I was on the train and we had gone a short distance, I realized the train was going in the opposite direction of Rome. I asked someone about it, and sure enough, I was on the wrong train! It's the first time it's happened to me in six years of traveling in Italy. I got off at the next stop, and waited 30 minutes for the next train going to Rome. Okay, so I wasted an hour, no big deal. I arrived in Rome at 9:30 am and started walking toward il Complesso del Vittoriano, near Piazza Venezia and the huge white monument toVittorio Emanuele II, often called "the birthday cake" due to its imposing size and structure. The Complesso, or complex, is behind the monument, and houses several exhibitions. 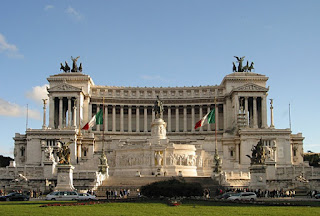 this photo by Nina Aldin Thune

Two years ago I took an elevator to the top of the monument, where there is an incredible panoramic view of Rome. 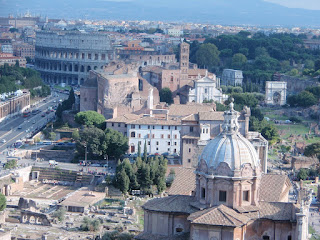 The Colosseo is in the background, and the ruins of il Foro Romano are visible on the left.


I spent several hours in the exhibit, then walked across town to Pincio, a huge park near the Villa Borghese. 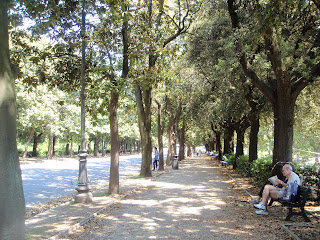 A scene in Pincio.


By this time, it was getting warm (80 degrees F, but it seemed more like 90) in Rome, and crowded. Walking around Pincio was the perfect antidote to the heat and the crowds. I intended to ride the subway back to the train station, but when I tried using my BIRG ticket, it didn't work in the turnstile. When I asked a subway attendant about it, he looked briefly at the ticket and said it should have been validated, then he went back to playing a game of cards. The ticket HAD been validated in Zagarolo, but I didn't feel like arguing with him. Instead, I decided to catch a bus. But I had to walk a long ways, back to Piazza Venezia, to find the right bus. I waded through the increasing crowds until I found the bus stop I needed.

By this time I was eager to get back to my oasis of tranquility in Zagarolo. I made it to the train with 15 minutes to spare, but then we sat on the tracks for another 20 minutes before finally leaving Termini. The house was peaceful and cool when I arrived home, and I was happy to be there. But I'll head back to Rome again next week...there's still a lot I want to see!
Posted by marybeth at 12:25 AM

As an art student researching the work of the Impressionists, I have big help from this site called wahooart.com. It's like a good art library, where, convenient for me,
works of artists are divided into art movements in history. Some of the works I had never seen before.
As the canvas prints are affordable, I ordered online a little size canvas print of my favorite,
http://en.wahooart.com/
A55A04/w.nsf/OPRA/BRUE-8EWE3X, by Claude Monet.